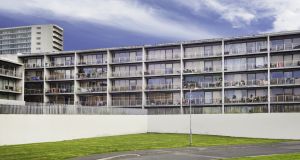 BidX1 has set a reserve of €1.3 million for nine apartments at Ballymun in north Dublin. They are due to be offered for sale in an online auction on February 23rd.

The six two-bedroom and three-bedroom units produce an annual rent roll of €111,900, reflecting a gross yield of 8.7 per cent.

The development is located opposite the Metro Hotel at Santry Cross junction. The apartments form part of a four-storey block and range in size from 67 to 75sq m (721-807sq ft).

Land for sale near M1 and Drogheda

Agent Knight Frank is guiding €1.5 million for a 75-acre land holding, divided into various lots, at Junction 10 of the MI motorway outside Drogheda in Co Louth.

The land is held in four separate holdings at the Tullyallen roundabout with easy access to Drogheda and Navan via the N51. Around 17.5 acres to the southeast of the roundabout are zoned residential. A further 47 acres to the west of the M1 are zoned for tourism and leisure, allowing them to be used for hotels and tourism accommodation.