Single lot sale to include retail centres in Cork, Balbriggan and Clonmel 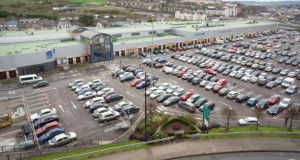 The National Asset Management Agency has confirmed the scale and identity of its first shopping centre portfolio to be offered for sale on the international market.

Joint agents Bannon and JLL have been appointed to handle the single lot sale of shopping centres at Blackpool in Cork, Balbriggan, Co Dublin and Clonmel, Co Tipperary, at a guide price of more than €130 million. At that valuation, the portfolio will show an initial yield of about 9.5 per cent.

Stephen Tennant of Grant Thornton is to oversee the sale of the Acorn Portfolio just as the real estate market is experiencing a tangible turnaround with overall returns at 7.2 per cent in the first three months of this year, marking the best performance since 2006.

The sale will be of interest to a range of private equity firms including Lone Star. Apollo, CarVal, Pimco and Kennedy Wilson as well as to the Irish REIT companies because of the opportunity to acquire a significant stake in the Irish retail market at strong initial yields and the potential for new lettings and rental growth.

The agents are expected to put a valuation of at least €75 million on the Blackpool shopping centre and Blackpool Retail Park which were funded by Bank of Ireland.

Millfield shopping centre in Balbriggan, developed three years ago by Calculation Developments at a cost of some €50 million is now likely to be valued at just over €40 million. Most of the funding came from the former Anglo Irish Bank but Nama is also understood to have provided financial assistance to allow it to open for business.

The third centre included in the sale, the Showgrounds in Clonmel, was developed by Paul O’Brien in 2009 at a cost of some €40 million – a long way from the its current value of about €15 million. Development funding was apparently provided by the former Anglo Irish Bank.


Institutional-type traders
The three centres are

producing a rent roll of €13 million after allowing for rent abatements. About 75 per cent of the overall space of 62,705sq m (675,000sq ft) is let to institutional-type traders on leases which have an average of 11 years to run. The Blackpool centre also includes 6,038sq m (65,000sq ft) of offices.

Blackpool is owned by the Love family’s Shipton Group which is a party to what is being described as a “consensual sale”. The Blackpool centres are understood to have substantial debts.

Shipton is also involved in the Douglas Court shopping centre on the opposite side of Cork city which has been in receivership since July, 2012, because of significant debts with Bank of Scotland.

The Blackpool facility is the dominant shopping attraction in north Cork where it trades successfully, has virtually no vacant shops and is producing an overall rental income of €7 million. An additional €1 million comes from office tenants. Dunnes Stores owns its anchor store of 6,967sq m (75,000sq ft) and the additional 10,219sq (110,000sq ft) of shopping space is occupied by a range of tenants including New Look, Claire’s Accessories, Peter Mark, Carphone Warehouse and Sam McCauley’s Pharmacy.

Unusually, the Shipton Group got planning permission for “open use” in the retail park which meant that it has been able to rent 70 per cent of the overall space to Aldi, Woodies, Boots, Heatons, Maplin and Next Home. The popularity of the centre has been greatly helped by the availability of 1,100 free car parking spaces.

The six investors who funded the Millfield shopping centre in Balbriggan along with AIB were unfortunate to have had to open the complex in the middle of a slump. The centre includes Tesco’s second largest outlet after Maynooth, a massive store extending to 9,615sq m (103,500sq ft) which is producing a rent of €2,345,000 under a lease with 16.9 years to run.

Tesco is reputed to have paid a premium of €11 million for the store to have been allowed influence the final configuration which permits them to trade out of two internal street mall levels.

The other traders include McDonald’s, Carphone Warehouse, Gleeson Butchers, Boots and Specsavers. One of the great features of Millfield is its car park which has no fewer than 1,387 spaces. There are also a number of adjoining sites which could be used at some future date for a petrol filling station (for which planning was granted), cinema, bar or other leisure facility. Jim Hamilton of BDO was appointed receiver a month ago.

€391,000; another anchor Argos pays €100,000 while the arrival last year of the third anchor TK Maxx has boosted the overall footfall by 11 per cent. TK Maxx has a rent-free arrangement until next July and from then onwards it will pay a percentage of its turnover – usually between 5 and 7 per cent – rather than the customary rent.

The other traders include Argos and Eason. The sale will also include a 12-acre development site with commercial zoning. Rod Nowlan of Bannon and John Moran of JLL said “the sale provides the first real opportunity to participate in the Irish retail growth story and at a scale that would appeal to investors”.

Each of the three centres dominates its catchment area. “There is secure cash flow from excellent tenants combined with asset management and development opportunities to significantly enhance returns and drive performance in a recovering market.”

1 What is Covid Tracker Ireland? The HSE’s new app explained
2 British holiday home rental company exits Irish market
3 Ireland’s economy forecast to shrink 8.5% due to Covid-19 pandemic
4 Will family’s tax debt stop me getting my inheritance?
5 Why gift a son now if it eats into his tax-free inheritance threshold?
6 How to save money while helping to save the planet
7 TikTok to quit Hong Kong mobile market ‘within days’
8 Poverty could afflict more than one-in-five children in State by year end
9 Central Bank governor to call for ‘credible’ path’ to cut State debt post-Covid-19
10 Call to allow firms ‘borrow back’ taxes paid last year
Real news has value SUBSCRIBE