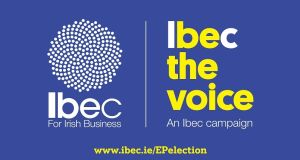 The employers’ representative group is to begin a three part series of debates in which Ireland’s European election candidates will be put through their paces on the issues. Photograph: Ibec

This week Ibec is in the business of elections and hopes Ireland’s forthcoming European Parliament candidates will be in the business of, well, business. With less than a month to go before polling day, the employers’ representative group is to begin a three part series of debates in which Ireland’s panel will be put through their paces on the issues.

In a climate replete with challenges around electoral interference, right wing tides and the very future of the EU itself, it would seem business issues might fall lower down the pecking order and so the trilogy of debates will offer an interesting insight into how primed the candidates are.

“The needs of business must be to the fore. Why? Because the success of businesses, large and small, will determine the ability of the EU to grow and prosper, improve job opportunities and living standards and generate the resources for public services and infrastructure investment.” - That at least is Ibec’s view, summed up with no ambiguity at the beginning of its campaign brochure.

The debates involve Ireland’s “top candidates” and will take place in Galway, Cork and Dublin between Wednesday and next Monday.

Issues of interest flagged by the organisers include the single market, digitalisation, global trade, taxation and labour market rules.

“Irish MEPs play a vital role in ensuring that specific Irish concerns are heard, understood and reflected in EU law,” Ibec says, and the gauntlet is thrown.

On Thursday IFG shareholders will meet at its annual general meeting to vote on the proposed takeover by London-based hedge fund Sand Grove Capital Management.

Sand Grove is known as an “event driven hedge fund” – one that chases profit from mergers and acquisitions among other corporate events.

At the end of March it confirmed it had bought a 6.2 per cent stake in the Dublin-listed IFG through financial derivatives called contracts for difference (CFDs). Its interest by the middle of April had reached 12.4 per cent.

The cheapest price it bought the CFDs was £1.885, a 2.4 per cent discount on the price at which the company had agreed to sell itself to UK private equity firm Epiris.

When news of the planned takeover emerged shares in IFG surged by 43 per cent.

In the last year, however, its stock had fallen by 28 per cent mainly as a reflection of mounting legal and other costs linked to a UK revenue investigation into Elysian Fuels. A decision to accept the takeover on Thursday would bring this difficult period to a close.