Implementing your vision when times are tough 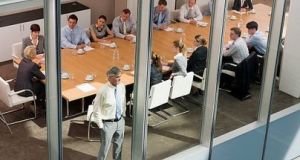 Leadership is all about context, and is an organisational process as well as an individual one. Photograph: Getty Images

The only thing certain in the world of work at the moment is that nothing is certain. Change is no longer confined to organisations: it is system-wide, interconnected and discontinuous. Wherever we look, leaders at all levels are challenged as they struggle to adjust and align in situations of increasing complexity.

I have been fortunate to closely observe and assist organisations facing and managing change in the most extreme environments through my work as an academic and adviser. There are some key lessons from that work.

First, think about how you frame your leadership.

Leaders are “pathfinders” within organisations. At their best they articulate a shared vision, understand strategy as a dynamic process, and “sense make” from confusing environments and mixed messages from stakeholders.

An analogy which is may be helpful comes from emergency medicine. When a patient is in difficulty they often have a number of skilled physicians working at the same time. But the consultant, the leader, is standing back, often behind, and watching. They can’t focus just on blood pressure or respiration or bleeding – they need to see it all, and how it connects.

When I’ve worked with leaders dealing with extreme volatility they have identified the cultivation of this mental space – a standing back – as a way to manage complexity and confusion.

Second, reflect on your organisation, and what you think it is currently established to do.

This may seem strange, but as Harvard academics Ronald Heifetz and Marty Linsky have observed: “There is no such thing as a dysfunctional organisation, because every organisation is perfectly aligned to get the results it currently gets.”

Asking what your organisation is actually aligned to do is useful even if sometimes uncomfortable as it allows leaders to identify hidden areas of dysfunction.

Third, understand your own conceptualisation of what leadership actually is.

Traditionally we have tended to see leaders as having some significant attributes which were usually positional (at the top), gender-based (male) and heroic (superhuman). Thankfully we now recognise that leadership appears at all organisational levels, and often looks very different from the stereotype.

Recognising enacted leadership when we see it is crucial. Rewarding and protecting those leadership behaviours you want within your organisation is just as vital. Retired US general Stanley McCrystal reflects upon this in his recent book, arguing that leaders are just humans surrounded by those who enable and find meaning in their activities.

Leadership is all about context, and is an organisational process as well as an individual one.

Sometimes timing is everything. One of the things my research has highlighted is that standard guidance on managing change doesn’t work in all contexts. When an organisation is under stress, introducing what is often called “a sense of urgency” can be actively unhelpful. Instead a paced and inductive approach is more useful.

I saw this most critically in the newly established Police Service of Northern Ireland (PSNI) which embarked upon radical, rapid change in a highly volatile environment. Ensuring that the organisation had a period to prepare was important even though it drew criticism at the time.

Thinking about how you time and pace big decisions and their implementation allows you to be in a better position for psychological and structural transition to be successful.

One of the most significant personal challenges for any leader is managing through periods of stress and instability. Continuing to demonstrate positive behaviours in negative environments is difficult to sustain but vital to those who are looking for direction.

During the Troubles and peace process, senior officials in the Irish Department of Foreign Affairs coined a phrase for periods of difficulty – they saw the department as having a “duty of hope”. Essentially, this spoke to two aspects of the challenge which faced them: their professional duty and their personal emotional response. As such it was a powerful and accessible idea to hold on to in the darkest of times.

Shakespeare famously wrote “the past is prologue” and this is never truer than in an organisation under pressure. Understanding the history and legacy of your organisation will tell you a great deal about why it behaves the way it does.

It’s possible to identify where the past impacts upon the present just by paying close attention to organisational myths.

Think about the stories your organisation members tell, especially to new people. Who are the heroes in these stories, and who are the villains? This will tell you a lot about your culture, and assist in managing diverse internal interests and perspectives.

Leading in complexity is challenging. Having time to reflect even when – especially when – volatility is at its most disruptive is critical.

Barack Obama and John McCain were both running for the presidency of the United States when the financial crisis hit. McCain suspended his campaign and suggested that the first presidential debate be postponed. Obama refused, commenting “that a president needs to be able to focus on more than one thing at one time”. It was an inflection point in the campaign, and McCain never regained momentum.

Obama had hit upon a fundamental truth of managing in extreme turbulence – the need to at least attempt the management of environmental complexity. These lessons; the cultivation of mental space, an awareness of aspects of dysfunction, leadership as a whole-organisation process, the timing and sequencing of change implementation, an awareness of emotion, and what the past tells you about the present should act as a guide for implementing your vision when times are tough.

Dr Joanne Murphy is a senior lecturer at Queen’s University management school, and the interim director of the William J Clinton Leadership Institute