Opinion: Mediahuis must deal with INM’s love/hate relationship with digital 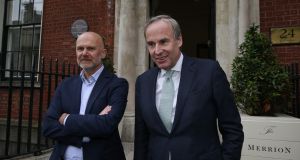 Many years ago at a dinner in the palatial home of the then Independent News & Media proprietor Tony O’Reilly a conversation developed around the question of why people buy newspapers.

One guest said that she always bought The Irish Times for the crossword, another said he loved the sports coverage in the Irish Independent, while a third said she read newspapers for the political coverage.

O’Reilly was late joining the table and when he did one of the guests decided to bring him up to speed. “Tony”, she said, “we were just having a chat about why people buy newspapers . . .”

O’Reilly immediately warmed to the subject. “There are lots of reasons why people buy newspapers”, he asserted confidently. “Circulation revenues are massive and increasing; the minimum profit margin is around 20 per cent and, in some cases, more. There is little to no resistance to cover price increases and we can get anything up to €25,000 a page for ads in the Sunday Independent. Newspapers are a very solid investment”.

O’Reilly had completely misunderstood the question but his answer revealed much.

INM, the Irish publishing company which he bought and developed into an international conglomerate with newspapers in Ireland, the UK, South Africa, Australia and New Zealand complemented by a chain of radio stations and outdoor advertising companies in the US and the southern hemisphere was a goldmine.

And it easily paid for the mansion in which O’Reilly was sitting, plus another couple around the world, and a private jet. They were the good old days.

On Tuesday, the company for which the O’Reilly family and Denis O’Brien fought such a bitter battle more than a decade ago, was sold to a Belgian and Dutch publishing company in a deal worth just under €146 million.

These are the bad old days.

O’Brien is out of pocket by about €500 million, Dermot Desmond may have lost a little of his fortune – at best, he has washed his face on an investment dating back to 2011. And INM faces many intricate challenges as its new owners try to make sense of their investment.

There is no question but that the price which Mediahuis has paid for INM is on the low side. Analysts suggest that it should have been at least twice the €146 million figure given that the company has about €81 million in the bank.

However, there has been a significant discount applied to cover a plethora of threatened legal actions on the horizon involving an alleged data breach and the ongoing investigation by the Office of the Director of Corporate Enforcement.

Given that INM has spent more than €5 million in legal costs since the ODCE process began, the “legal” discount off the sale price could be anything upwards of €25 million.

O’Brien bought INM shares in a hail of publicity and controversy more than a decade ago. Any extraneous activities, such as the South African chain of newspapers and Australian publishing interests were offloaded and a massive consolidation of the core assets in Ireland began.

The results do not make for happy reading.

The company’s earnings before interest, tax, depreciation and amortisation have plunged from €102 million when O’Brien bought into the company to €30 million last year, the full year of 2018.

Revenues are down 22 per cent but during that time almost €60 million has been taken out of costs. The operating profit line has fallen during the period from €46 million to €24 million. On the plus side, the company is now debt free having been highly leveraged.

But it is hardly surprising therefore that O’Brien was anxious to offload what has been a disastrous investment and a troublesome child.

It wasn’t from the want of trying that the company failed to perform under the post-O’Reilly management, and to a certain extent, the Indo’s travails are some of those that affect the world’s newspaper industry.

Circulation and advertising revenues have been decimated. The team at Talbot Street and in Belfast drove hard to cut waste, deliver efficiencies and eliminate what was perceived as an editorial bias against some of Ireland’s biggest business names. However, in the process, parts of the baby went down the sluice with the bath water.

In the seven years since the O’Reillys departed, hundreds of INM staff have been laid off as consultant after consultant was introduced to deliver even more savings.

At least 100 journalists were either made redundant or left as pagination in the newspapers was cut, magazine supplements were hacked back, and advertising departments were integrated with a loss of many of the leading senior sales people.

The editorial backbone of the newspapers was sliced through in an exodus that saw leading journalists leave the company. Gone were names like Tom Lyons, Nick Webb, Clodagh Sheehy, Stephen O’Brien, Michael Brennan and Daniel McConnell.

There was a total collapse in morale. However, the group that Mediahuis will inherit is well worth the money it is planning to pay. The distribution arm Newspread is worth at least €50 million, based on estimated profits of €12 million a year. It is the single biggest contributor to INM’s profits.

Mediahuis is the result of the merging of two of Europe’s largest newspapers, De Standaard in Belgium and De Telegraaf in the Netherlands.

The group has also been affected by falling sales but has managed to develop a digital strategy that has seen it produce profit growth over the past number of years. Its first and most decisive step as the new owners of INM will be to push that strategy into Talbot Street and across the Irish market. They will be determined to get readers to pay for its newspapers online.

INM has always had a love/hate relationship with digital. It still takes about €80 million a year in circulation revenue across its national titles and there has always been a reluctance to interfere with this revenue by offering readers a cheaper alternative on a website.

Eight years ago a detailed plan to introduce a paywall across the digital titles was abandoned after months of planning when the company simply lost its nerve. It wanted both the largest circulation in print and the consequent revenue, and the largest number of readers online. It didn’t matter that the digital readers were not paying for the products.

A number of years ago the Sunday World launched a website that was shut down shortly afterwards because it was costing too much, €250,000 a year. Mediahuis’s challenge in changing this attitude is not inconsiderable.

The majority of European newspapers are sold on a home delivery basis with a sophisticated distribution system managing to get titles to customers before they leave for work in the morning.

It is a fiendishly expensive system and Mediahuis invested huge sums of money to woo its home delivery readers on to the web. It has been very successful and has yielded large savings and subsequent profits for the group.

This is the model on which the Mediahuis digital strategy is based but it’s one that will be nigh to impossible to implement in this country.

So the issue facing Mediahuis is the same as those that faced O’ Brien and INM before that. How can the millions of readers who read the newspaper free online every day be persuaded to part with a subscription which, of its nature, will be higher than what Netflix asks of them each month?

The imperative is still there. INM will not want to do anything to distract readers who pay the best part of €2 million every week for the printed word, even though this revenue is falling dramatically.

The Europeans see it as a company that can deliver digitally with a subsequent reduction in print costs and a consequent increase in profits. Editorially, the group has been purged of its core talent, a factor that will make developing the products both in print and online quite difficult.

Repairing that damage and developing a profitable digital strategy that works will be no easy task for the new owners.

Michael Brophy is a former editor at INM, a former managing director of the Sunday World and former chief executive of INM (Northern Ireland). He is currently chairman of Public Affairs company Hume Brophy. His son Karl Brophy is also a former INM executive and leads Red Flag Consulting, which is chaired by former INM CEO Gavin O’Reilly

1 Two prominent business leaders in planning row with neighbour
2 Should my mam wait for house prices to drop before buying?
3 Cheers: Conor McGregor's whiskey races up the sales chart
4 ‘I’m so lucky to be in the Caribbean – a million miles from Derry Girls’
5 Chris Johns: Past is another country when it comes to our post-pandemic future
6 Joint accounts: if one of us dies, can the other access the money?
7 Why we’re about to learn if we are really in the A-team
8 Military-style planning can help businesses battle Covid-19 survival threat
9 Citigroup warns that markets are out of step with reality
10 ‘The recovery needs to be a full-scale economic renewal’
Real news has value SUBSCRIBE