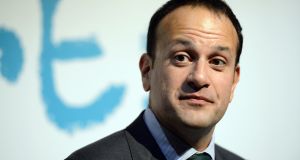 100 days to Brexit: Tánaiste Leo Varadkar is urging businesses to brace for the changes it will bring. Photograph: Cyril Byrne

We are leading this morning with the news that more than 1,400 Bank of Ireland staff have applied for voluntary redundancy, exceeding the number of job cuts that the lender is targeting over the coming years. Joe Brennan has the details.

He also reports on a warning from a top tax official at the Organisation for Economic Co-operation and Development (OECD), who has said Ireland will suffer more than most countries if efforts to secure a global digital tax agreement fail. Pascal Saint-Amans said an international “trade war or tax war” could be triggered in such an event.

The retail industry is warning of a “Nama-like problem coming down the road” for landlords, with up to two-thirds of retailers still carrying rent arrears arising from the lockdown of April and May. The Government is preparing a new code of practice for the sector in coming weeks after coming under pressure from retail representatives, writes Mark Paul.

With exactly 100 days to go until Brexit, Tánaiste Leo Varadkar is urging businesses to brace for the changes it will bring, highlighting a grant of up to €9,000 available per employee taken on or redeployed to enable businesses build their capacity to manage customs changes. Peter Hamilton reports.

With the Friday deadline fast approaching, European Union competition commissioner Margrethe Vestager is reported to be leaning towards lodging an appeal against a court decision that quashed her finding four years ago that Apple received €13.1 billon of illegal State aid from Ireland. Joe Brennan reports.

Ciarán Hancock sits down in an almost empty Clayton Hotel with Dalata chief executive Pat McCann, who talks in the weekly interview about the battering the tourism industry has taken due to the pandemic, surviving 2020, and seeking opportunity in the crisis.

And in his column, Eoin Burke-Kennedy ponders the mammoth task that lies ahead for governments and pharmaceutical companies inefforts to inoculate the world’s 15 billion people against Covid-19.

In Commercial Property today, Ronald Quinlan reports on how French investor Corum Asset Management has increased its investment in the Irish market to €257 million, with the €27.7m purchase of Block 12 at The Campus in Cherrywood in south Dublin.