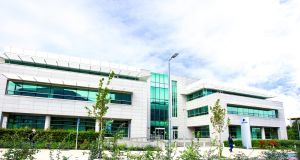 French asset management company Corum has increased its overall investment in the Republic and Northern Ireland to just under €257 million, with the €27.7 million acquisition of Block 12 at The Campus in Cherrywood in south Dublin.

News of the transaction should provide something of a fillip for the commercial real estate sector, and for the office market particularly, coming as it does in the midst of the ongoing uncertainty being caused by the Covid-19 pandemic.

Corum bought the property on behalf of the Corum XL Fund from Spear Street Capital, the US-headquartered real estate investor that acquired the Cherrywood business park in December 2017 from Hines and King Street.

Block 12 is fully occupied by the global insurance giant Aviva on a 25-year full repairing and insuring lease from July 2002 with no break options. The annual rental income is €1.810 million, reflecting a highly-competitive rental rate of €21.50 per square foot. The building’s car parking income has five-yearly upward-only rent reviews, with the next rent review due in July 2022.

The building itself comprises three storeys of flexible, high-quality office accommodation on a site of approximately 2.5 acres.

Michele McGarry and Aoife Murray of Colliers International advised Corum on the acquisition of the Cherrywood property while John Moran and Jacqueline Fitzpatrick of JLL acted for the vendor, Spear Street Capital.

Since acquiring the Campus office complex last December, Spear Street have invested heavily in place-making with a view to making it an effective complement to the wider Cherrywood development, which is being led by Hines. Upon completion, the new town of Cherrywood will comprise more than 7,700 new homes, offices, shops, six schools, three public parks and leisure facilities, with four Luas stops srving an eventual planned population of 25,000 people.

Corum’s acquisition of Block 12 at The Campus follows on from its €18 million purchase last April of Blackthorn House in Sandyford from Irish Life, and its agreement just weeks earlier to pay €5.6 million for Aldi’s supermarket premises in Carrigtwohill, Co Cork.

In January the French investment giant paid €30.5 million and €29.5 million respectively to acquire One Kilmainham Square in Dublin 8 and Classon House in Dublin 14 from a joint venture partnership led by Avestus Capital Partners.

In 2019 Corum acquired the Tesco premises in Gorey, Co Wexford, and South Point at Grand Canal Dock, Dublin, for €21 million and €12.7 million respectively.

A year earlier it paid more than £16.4 million (€18.8 million) for 40-46 Donegall Place in Belfast city centre. The sale of the property, which is occupied by Next and Eason, represented the company’s first investment in the Northern Ireland market.

In 2017 Corum paid €14 million to add the Joyce’s Court retail and office complex off Talbot Street, Dublin, to its then €80 million portfolio of Irish assets. The company had previously acquired Voxpro Office Park in Cork and another office complex in Galway as well as Harvey Norman’s retail store in Cork.

Commenting on Corum’s latest Irish investment, Michele McGarry of Colliers said: “We are delighted to have concluded the acquisition of Block 12 on behalf of Corum. This sale demonstrates the market’s resilience against the backdrop of Covid-19 and confirms the demand for good quality, well-let office investment opportunities.”

John Moran of JLL said: “This sale clearly demonstrates the progress that The Campus has made during its ownership under Spear Street and it is great to see new institutional capital investing along side them.”