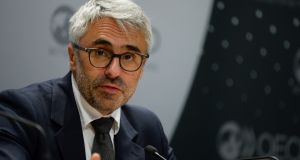 Ireland will suffer more than most countries if efforts to secure a global digital tax agreement fail, triggering an international “trade war or tax war”, according to top tax official at the Organisation for Economic Co-operation and Development (OECD).

Addressing the Institute of International & European Affairs (IIEA) in Dublin via videolink on Tuesday, Pascal Saint-Amans, director of the OECD’s tax policy centre, said the organisation will proceed next month with the publication of consultation papers on plans to reform international taxation in a digitalised world, even if meaningful talks are delayed until after the US elections in November.

European Union officials have said they will seek to press ahead with proposals for a digital tax on tech companies at the end of the year if a wider collection of 137 countries fail to get a multilateral deal within the OECD.

Minister for Finance Paschal Donohoe, who has said he wants an accord at OECD level, has warned the State could lose up to €2 billion of corporate tax revenue under proposals to reform the global tax system, equating to about 20 per cent of last year’s corporate tax take.

Mr Saint-Amans agreed, when asked, that it may be true that bigger countries stand to benefit from tax reforms more than smaller countries.

“But you have to put that into perspective,” he added. “What happens if there is no multinational solution? The ones which pay the higher price will be the small countries. The trade war or tax war will make Ireland suffer relatively more than all the others.”

The OECD official said an impact assessment being published in the middle of October, just before a meeting of finance ministers from the Group of 20, or G20, industrial and developing countries, will show “pretty clearly that a global solution is not adverse to investment, not adverse to growth”.

Mr Saint-Amans said Minister for Finance Paschal Donohoe and his predecessor Michael Noonan, who have had “very constructive input” into OECD tax reform efforts, “have well understood that the solution is multilateral, or then it’s chaos - which is not good for yourselves.”

The comments come as the EU weighs whether to appeal a high-profile court ruling in July that quashed a previous European Commission finding that Apple received €13.1 billon of illegal state aid from the Republic. Brussels has until midnight on Friday to lodge an appeal.

The area of tax reform has become a hot topic internationally since the 2008 financial crisis, which put a focus on the downsides of globalisation and financialisation - and governments were landed with large bank-bailout bills and debt burdens.

The official said reform considerations have led to a conclusion that “there is no such thing as the digital economy, but the digitalisation of the economy”, which must be addressed.

The OECD has been seeking to build consensus around two so-called pillars. Pillar One is to reach a unified approach on taxation of the digital economy, and Pillar Two is to achieve global minimum tax rate that would redistribute tax revenues. Countries differ on what is a priority and the OECD is planning next month to publish blueprints on both, which have already been leaked.

Mr Saint-Amans said that while Irish authorities “can cope with” Pillar One reforms, Pillar Two “you don’t like”.

The executive also noted that the OECD’s base erosion and profit shifting programme (BEPS) to combat tax avoidance in the middle of the last decade resulted in an “almost embarrassing” increase in Irish gross domestic product (GDP) and corporate tax, as companies “onshored” massive amounts of intellectual property from tax havens.