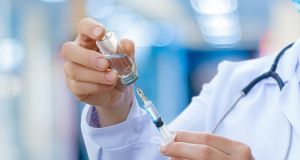 The good news is there are nine coronavirus vaccines in the running to be approved. Several big-name pharma companies, including Pfizer, Moderna and AstraZeneca, are currently testing their candidate vaccines in late-stage clinical trials.

The less good news is that we’ll need 15 billion doses to inoculate the planet, as the required shot, in most cases, is a two-dose vaccine.

And there are just four to six plants in the world capable of producing vaccines on such a large scale, presenting a significant production bottleneck to be surmounted before these medicines can be deployed.

Even with the additional capacity planned, it will take until 2022 before there are enough vaccines to go around.

These were just some of the conclusions in a report published on Tuesday by Deutsche Bank, which assessed the likelihood of a vaccine and the global evolution of the disease to date.

It warned that the rush to deploy a vaccine could be a “backward step”, citing a number of examples from recent history when regulatory authorities granted “speedy approval” to vaccines that proved to have significant side-effects – lethal in some cases.

It also noted that one of the “ big unknowns” is how many people will be willing to take a successful vaccine. The bank surveyed more than 5,500 citizens in several countries to test their intention of being vaccinated for Covid-19. It found that while a majority would get vaccinated, ranging from 61 per cent in France to 78 per cent in the UK, a substantial minority in each country either said they were unsure or would not get vaccinated. This could prove a major headache for authorities down the road.

Pandemics typically end when there aren’t enough susceptible people to infect and the train of transmission breaks. This is achieved in one of three ways: containment and control; herd immunity via mass infection; or herd immunity through a vaccine.

Containment is the path we’re on at the moment but measures here and elsewhere are being frustrated by two core characteristics of the disease. First, there is the the subtlety around transmission, and the fact that an estimated 50 per cent of infections are transmitted unknowingly by asymptomatic carriers. Second, the virus has a long incubation period of up to 14 days, complicating efforts to engage in contact tracing.

These challenges are further exacerbated by the fact that many governments have found it difficult to ramp up their testing capacity.

Herd immunity via mass infection is another route to eradication. This is how the great Spanish flu pandemic of 1918, estimated to have infected 500 million people – one third of the world’s population – was finally extinguished.

The threshold for herd immunity is different for different diseases. In the case of measles, one of the most infectious, it is 93-95 per cent, for other diseases it is lower. We don’t know what that threshold is for coronavirus. And getting to that point may take time and involve a significant death toll among the elderly and vulnerable if we were to attempt it without significant intervention.

And there is an added complication: we don’t know if those who’ve had Covid-19 are immune to future infection. There are patients in several countries who have recovered from the virus only to test positive again. Is this a case of re-infection, or the re-emergence of lapsed symptoms? The phenomenon is still being studied.

The other route to herd immunity is through a vaccine. For many people, this is the silver bullet, the one that delivers us from the current health and economic crises in one go.

But, as the Deutsche Bank report indicates, there are a number of logistical and behavioural challenges between the arrival of a vaccine and mass inoculation. The report assumes we won’t be in a position to vaccinate the global population until 2022.

The chief executive of the world’s largest vaccine manufacturer predicts a longer timeline, saying it won’t be until the end of 2024 at the earliest.

Adar Poonawalla, chief executive of the Serum Institute of India, which has partnered with five top pharmaceutical companies, including AstraZeneca, to develop a vaccine, also cites production capacity as the limiting factor.

These assessments make a nonsense of claims by politicians that we’ll have vaccines by the end of the year. US president Donald Trump has said a vaccine should be ready by October.

There is also a fear that richer countries will outbid poorer ones to get the vaccines first. Advanced economies have already started signing bilateral supply agreements with manufacturers.

The resurgence of cases here might have been inevitable once the easing of restrictions began. Much of Europe is experiencing a similar trend, but the second wave involves mainly younger people and fewer hospital admissions, though experts warn the latter is rising.

The “excess deaths” over the seasonal norm figure, the one that epidemiologists study, which soared in April, is not significant either, but experts warn this will also change unless the renewed outbreak is contained.

The notion, adopted at the outset, that lockdown would contain the virus and from there on in testing and tracing would control it – the forest fire analogy – has unravelled.

The new narrative suggests mass testing isn’t enough, and that restrictions and possible lockdowns will go on.