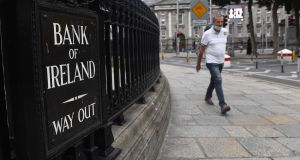 Bank of Ireland announced in August that it planned to cut its workforce from 10,400 to 9,000. Photograph: Aidan Crawley/Bloomberg

More than 1,400 Bank of Ireland staff have applied for voluntary redundancy, exceeding the number of job cuts that the lender is targeting over the coming years, according to sources.

The bank has set a deadline of Wednesday afternoon for employees to signal an interest in the voluntary severance scheme. But it must now weigh carefully what percentage of the applications it can afford to accept in the coming months without affecting its branch network or staffing in key areas like handling problem loans as Covid-19 payment breaks roll off, it said.

“The scheme has been well received internally. This follows extensive engagement with colleagues over the past few weeks to provide guidance and advice on all the options available to them,” said a bank spokesman, who declined to comment on the number of applications.

Bank of Ireland announced in early August that it planned to cut its workforce from 10,400 to 9,000 over time as the ongoing squeeze on lenders’ incomes from an extended period of ultra-low interest rates and muted demand has been exacerbated by the Covid-19 crisis.

While the bank offered enhanced terms to employees applying for voluntary redundancy by September 23rd, group chief executive Francesca McDonagh said at the time that she had not set a limit for staff exiting under this stage of the plan, and that it would likely be after 2021 before her headcount target was reached.

Ireland’s five main banks have slashed staff numbers by 45 per cent since the 2008 crash to about 26,500 today.

AIB signalled earlier this year that it would cull 1,500 jobs by 2022, and Ulster Bank in the Republic announced two weeks ago that it was planning to cut 266 jobs, or 9.5 per cent of its positions. It subsequently emerged that Ulster Bank’s parent, NatWest, is considering closing down the Irish unit as it weighs up strategic options for the business which has been dogged for years by low profitability and returns.

Bank of Ireland is offering four weeks’ pay per year of service, in addition to the statutory two weeks, under an enhanced voluntary redundancy package that will become the new standard for the bank. It previously offered just three weeks’ pay, plus statutory entitlements.

As a once-off to encourage employees to apply for redundancy in the current round, the bank has raised the upper limit on what a departing employee can receive to 2½ times’ salary, up to a maximum €300,000, compared with the standard limit of two times’ salary. It has also promised to pay three weeks’ pay in lieu of notice to staff opting to leave under the current programme, as well as a retraining grant of €5,000.

Bank of Ireland posted a loss of €669 million for the first half of the year, after taking a €937 million charge for an expected spike in bad debts amid the coronavirus crisis.