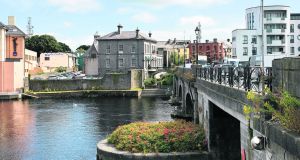 Athlone: unfairly portrayed as “a place to pass through”, says the group behind the bid

Athlone’s push to be designated a regional city under the State’s new spatial plan includes a proposal for the marketing of Athlone as a hub for life science and technology firms.

The ideas are contained in a major submission to the Government compiled by consultants on behalf of an Athlone steering group as part of the National Planning Framework (NPF) or Ireland 2040 spatial project.

Athlone Institute of Technology and local representatives of IDA Ireland are also involved in Destination Athlone, which is modelled on a steering group that helped promote the development of Westport, Co Mayo in recent years. The group is chaired by hotelier John O’Sullivan, who owns the Hodson Bay group.

Destination Athlone wants the town to be designated as the regional city for the midlands that has been mooted under the NPF, a draft of which will go to cabinet after the summer recess. Roscommon County Council has separately made a submission calling for Athlone to get city status, while the issue has also been strongly pressed by local Independent TD, Kevin “Boxer” Moran.

The NPF is being developed as the 20-year successor to the old National Spatial Strategy (NSS), which runs out in 2020. Athlone previously made a bid for city status under the NSS, but instead it was designated a linked gateway in conjunction with Tullamore and Mullingar, a hook-up known as the ATM.

Athlone’s latest bid says the ATM linkage failed to spur balanced growth in the region, and the State should simply promote the development of Athlone as a new city for the midlands region.

The bid says the region is unfairly portrayed as “flat and featureless”, with Athlone being seen as “a place to pass through” in a “tired cliche”.

The population of the town is currently only about 21,000, but the document suggests that if it is developed as a city, this should double by the time the NPF runs out in 2040. By then, the document says, Athlone could be the hub for a wider region within an hour’s drive with a population of more than 500,000.

Future Analytics, the consultants who helped draw up the document, have told Destination Athlone that by 2040, the wider region served by Athlone as a city hub could have an economy worth €9 billion on a gross-value-added basis, which differs from GDP with, for example, the inclusion of subsidies.

The wider midlands region’s economy was worth about €6.2 billion in 2014, according to State figures.

Architects Murray O’Laoire also helped draft the Destination Athlone bid. The document suggests that more than 51,000 new housing units would be needed in the region by 2040. It says there is already enough serviced land to accommodate more than 25,000 units.

The bid also says developing Athlone as a city would ease congestion and traffic around Dublin, drawing some of the flow westwards from the capital. An urban forest is also proposed for Athlone’s Shannon flood plains.

There is already a proposal in train for a new walking and cycle way across the Shannon at Athlone, which would make the new city more “walkable”.

“The challenge is to create a cohesive region of scale,” said Mr O’Sullivan. He added that a designation of regional city status for Athlone would spur public investment, which would in turn lead to more private investment.

1 How much state pension will I get next year?
2 Am I crazy to consider switching to an Ulster Bank mortgage?
3 Up or down – how much is your Local Property Tax this year?
4 Fall in mortgage drawdowns, Brexit threat to services, and advice on your pension
5 How long can Government afford to keep State pension age at 66?
6 Brexit to curb services trade with UK, accountants group warns
7 Mortgage drawdowns fall by almost a third
8 Oxford Covid vaccine trials offer hope for elderly
9 Hurrah for the companies giving staff more time off
10 Tesco takes to the skies with home delivery by drone
Real news has value SUBSCRIBE