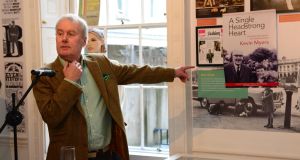 One third of people who contacted the Press Ombudsman this week in relation to controversial columnist Kevin Myers were complaining about him being fired by the Sunday Times.

The newspaper announced last Sunday that Myers would no longer write for it, hours after it published his column on the gender pay gap which contained remarks many saw as misogynistic and offensive to Jewish people. The online version of the piece has since being deleted.

The Irish and British editors of the Sunday Times, which has no connection to The Irish Times, also issued an apology for running the piece. Myers himself has since apologised “unconditionally” to Claudia Winkleman and Vanessa Feltz, the two Jewish BBC presenters he referenced in the column. He said he believes his career “is finished.”

The Sunday Times conducted an internal review into how the column was published. A spokeswoman for the paper would not comment on the review but it is understood that no other dismissals will take place in relation to the publication of the column.

It is understood columns produced for the newspaper’s Irish edition are read by editorial staff in Dublin then sent to London for subediting, before being returned to Dublin to be read for potential legal problems, prior to publication.

The Press Ombudsman Peter Feeney told The Irish Times on Friday that his office has received 16 complaints about the article. He said five of these were people complaining that Mr Myers had been fired.

Mr Feeney said these five complaints will be examined but that it’s difficult to see what section of the Press Council’s Code of Conduct they would relate to.

The remaining 11 complaints relate to accusations of anti-Semitism and misogyny in the article. The complaints came from seven women and four men.

“There’s a head of steam building up in support of Myers, you can see it in the papers” Mr Feeney said.

“There is more licence in a comment section than in an opinion section. It’s judging where that crosses the line, that’s the difficult part,” Mr Feeney added.

The Ombudsman’s UK equivalent, The Independent Press Standards Organisation (IPSO), has received about 25 complaints. However these complainants are being referred to Mr Feeney’s office because the article was published by the Irish edition of the newspaper.

Mr Feeney said he expects many of these people to drop out of the complaints process before contacting his office.

The complainants to the Ombudsman are not official yet because complainants first have to write to the editor of the newspaper who then has two weeks to respond. It is only then that an official complaint can be made.

Mr Feeney said he expects more of the complainants will drop out before then.