A 33-year-old woman escapes serious injury when a jogger appears to push her into the path of a bus. The bus stopped and passengers tended to the woman who received minor injuries. Video: Metropolitan Police 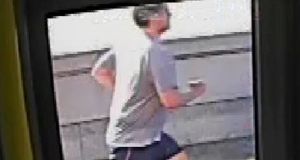 A man arrested on suspicion of pushing a woman into the path of an oncoming bus while out jogging has been identified as a partner at a London private equity firm.

Eric Bellquist, a partner at the Mayfair-based private equity firm, said he was not the jogger caught on CCTV shoving a woman into the road on Putney Bridge, southwest London, with his lawyers stating he has “irrefutable proof” that he was in the US at the time of the incident.

While the encounter occurred in May, it came to the attention of the public this week after police released surveillance video that was widely shared online.

Mr Bellquist works for Hutton Collins Partners, which owns restaurant chains Wagamama and Byron. He sits on the boards of the restaurant chains as a non-executive director, and has previously worked for the failed US investment bank Lehman Brothers.

The Metropolitan police said on Thursday they had arrested a man in Chelsea on suspicion of causing grievous bodily harm. He was later released on bail.

Mr Bellquist’s lawyers, Duncan Lewis solicitors, said: “This statement is issued in relation to our client Mr Eric Bellquist, who was arrested yesterday in relation to an assault that took place between a male jogger and a female pedestrian on 5 May 2017 on Putney Bridge, London.

“Our client has been wrongly implicated in this matter; he categorically denies being the individual concerned, and has irrefutable proof that he was in the United States at the time of the incident. Consequently, we expect a swift resolution to this wholly untrue allegation.”

According to his LinkedIn profile, Mr Bellquist studied business administration at the University of Colorado, Boulder, US. He became a partner at Hutton Collins in 2002.

The CCTV footage showed a man dressed in a light grey T-shirt and blue shorts apparently barging into the 33-year-old woman, knocking her into the road on the east side of Putney Bridge and forcing a bus to swerve to avoid her.

The Met said the bus stopped and passengers tended to the woman, who sustained minor injuries, after the incident at about 7.40am on May 5th.

Officers said the jogger ran back the other way across the bridge about 15 minutes later, and the victim tried to speak to him but “he did not acknowledge her”.

The Met Police said it had received a “huge response” to its appeal for information in a case that has captured national attention. – Guardian News and Media 2017