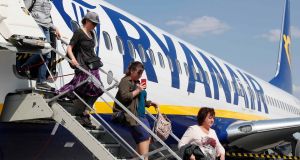 Ryanair releases third-quarter numbers on Monday. Earlier this month, it lowered its full-year guidance to about €1 to €1.1 billion on the back of weaker winter fares. Photograph: Gleb Garanich/Reuters

Ryanair is about to report its last set of results – probably – before the United Kingdom’s departure from the European Union having steered much of the conversation around what is likely to happen afterwards.

The low-cost carrier releases third-quarter numbers on Monday. Earlier this month, it lowered its full-year guidance from €1.1 to €1.2 billion to about €1 to €1.1 billion on the back of weaker winter fares, expected to fall by 7 per cent rather than the previously estimated 2 per cent.

It said a lower fare environment would continue to “shake out” loss-making competitors.

In a note at the time Davy said this was “good for market share as evidenced by Norwegian’s recent announcement of its plans to close bases in Rome, Gran Canaria, Tenerife and Palma, where it competed head-to-head with Ryanair”.

Meanwhile, future concerns around post-Brexit conditions in the sector appear to be taking some shape.

Late last year, chief executive Michael O’Leary said UK planes could be grounded for up to three weeks. However, at an economics conference in Kerry earlier this month, Peter Bellew, chief operating officer, said: “I don’t see there being an overnight stoppage of any flights” – due to complicated contingency plans under way by airlines.

Separately, the Commission for Aviation Regulation said it was satisfied Irish airlines would be in compliance with EU ownership rules to continue flying into the UK.

This year marks the 40th anniversary of the annual Checkout conference for the grocery retail sector and, if it describes itself as a “continually turbulent industry”, then 2019 stands to be among its shakiest periods.

Brexit and the creep of online sales, even in the grocery area, are obvious challenges and it is no surprise they form a central part of this year’s event.

But other more esoteric aspects of the sector will be unwrapped on Monday. There is a noticeable focus on sustainable retail – “looking at how retailers are responding to the needs of the ethical and responsible shopper”. Key among these is packaging and efforts by businesses to rid themselves of single-use plastics in a rapidly evolving customer environment with its environmental ethic.

The data published by Nielsen showed Irish people were willing to educate themselves when it comes to environmental issues. Retailers who stay ahead of the game are likely to benefit – shortly before the Nielsen study, Lidl announced its intention to clear its shelves of plastics used on fruit and veg products that could not be recycled. There is a sense this is just the beginning.