Company plans to grow Austrian subsidiary to 7.5m passengers by 2021 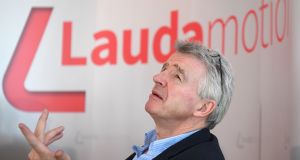 Ryanair has acquired the remaining quarter of its Austrian unit Laudamotion for an undisclosed price, it said on Tuesday.

Europe’s largest budget carrier previously owned a 75 per cent stake in Laudamotion. Former Formula One racing champion Niki Lauda, who last year bought back and rebranded the airline he founded, had given Ryanair the option to buy the whole carrier.

At a news conference at Vienna’s main airport, Ryanair chief executive Michael O’Leary declined to disclose the price his company paid for Laudamotion. In March it said it would pay below €50 million for 75 per cent.

The deal for the last stake was completed on December 31st but had nothing to do with Mr Lauda’s brief return to hospital shortly afterwards, Mr O’Leary said. Mr Lauda will stay on as chairman of Laudamotion’s board.

Both the airline and the unions intend to conclude a collective labour agreement before April 30th. – Reuters

1 ‘In Austin, there just seems to be something for everyone here’
2 Euro finance ministers agree €500bn package to address pandemic fallout
3 Lockdown exit: How can Irish economy reopen without big health risks?
4 Dutch go out on limb in fractious negotiations on aid for fellow EU states
5 Timeless tips and fresh perspectives for uncertain times
6 Eurobonds set aside as finance ministers broker compromise
7 TCD to spend €200,000 on Chinese student recruitment drive
8 Debenhams to shut all stores in Republic with loss of 2,000 jobs
9 Bank puts business owner on hold for month on Covid finance
10 Amazon fly dedicated aircraft into Belfast to fill online orders
Real news has value SUBSCRIBE