Up to one in three UK businesses ‘could move operations abroad’ 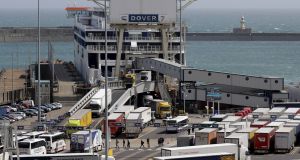 Lorries at Dover. A survey of 1,200 senior businessmen and women by the Institute of Directors found that 16 per cent already had relocation plans while a further 13 per cent were actively considering doing so.

Almost a third of British businesses could be forced to shift operations abroad because of Brexit, according to research among company directors.

A survey of 1,200 senior businessmen and women by the Institute of Directors found that 16 per cent already had relocation plans while a further 13 per cent were actively considering doing so.

More large companies had already moved operations, but small firms were almost twice as likely to be actively considering the prospect, the study suggested.

Edwin Morgan, interim director general of the Institute of Directors, said: “It brings no pleasure to reveal these worrying signs, but we can no more ignore the real consequences of delay and confusion than business leaders can ignore the hard choices that they face in protecting their companies.

“Change is a necessary and often positive part of doing business, but the unavoidable disruption and increased trade barriers that no deal would bring are entirely unproductive.

“While the actions of big companies have been making headlines, these figures suggest that smaller enterprises are increasingly considering taking the serious step of moving some operations abroad.

“For these firms, typically with tighter resources, to be thinking about such a costly course of action makes clear the precarious position they are in.”

A Government spokesman said: “We want to protect jobs and the economy as well as provide certainty for businesses and individuals as we leave the EU. The best way to do this is to leave with a deal, and that’s what we’re focused on doing.

“The strong economic foundations we are putting in place through our modern industrial strategy are part of the reason the UK was recently rated the best place in the world for business, and saw more than €100 billion of foreign direct investment in the last three years, more than France and Germany combined.”