Brexit exasperation turns to anger in Dublin and Brussels

Business Week: also in the news were the Central Bank; mortgages; and corruption 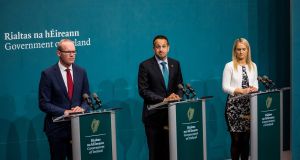 Tánaiste Simon Coveney, Taoiseach Leo Varadkar and Minister for European Affairs Helen McEntee at Government Buildings. Mr Varadkar phoned Theresa May this week and reminded her that it was “unusual” to go back on an agreement

Senior figures in Dublin and Brussels almost seemed to lose the rag this week as events in the House of Commons took another unexpected twist and plunged Brexit into yet deeper uncertainty.

In what was a striking reversal of fortunes for UK prime minister Theresa May, MPs voted to support her Brexit deal on the condition she secures changes to the Northern Ireland backstop – leaving the EU furious.

Taoiseach Leo Varadkar phoned May and reminded her that it was “unusual” to go back on an agreement, before later asserting that the UK’s about-turn had only reinforced the need for a legally binding backstop.

Minister for European Affairs Helen McEntee, for her part, could barely disguise her scorn for events in London. “It’s exasperating at this stage,” she said. “It looks like there’s row-back and a reneging on the commitments that have been made.”

EU chief negotiator Michel Barnier also criticised May’s retreat, and was equally contemptuous of the House of Commons’ vote for a non-binding amendment opposing a no-deal Brexit. “Voting against a no deal does not rule out the risk of no deal,” he pointed out.

In a further sign of deteriorating relations, the Government said former UK Brexit secretary Dominic Raab was “off the wall” when he accused Varadkar of leaking the contents of a meeting between Raab and Tánaiste Simon Coveney.

Amid all the rancour, May promised MPs she would seek to have the deal reopened. In something of a lighter moment, the BBC mistakenly broadcast footage of a fleet of second World War bombers in flight during its report on her return to Brussels.

What May plans to say when she finally does head for the continent though is anyone’s guess. The best MPs could come up with – and it could hardly be described as a lightbulb moment – was to replace the backstop with “alternative arrangements”.

Brexit secretary Stephen Barclay failed five times in a radio interview to elaborate on what these alternative arrangements might be, and presented already dismissed proposals such as the use of technology.

Meanwhile, projections published by the Department of Finance showed the economy will grow at a much slower pace than anticipated in the event of a no-deal Brexit but will not tip into recession. However, the unemployment rate could rise by 2 per cent.

In better news for the Republic, London-based banking giant Barclays is to move £166 billion (€190 billion) of assets to its Irish subsidiary to deal with the fallout of Brexit, while US insurance group Travelers got a licence to set up a new hub here.

Following the appointments of Francesca McDonagh and Jane Howard to the top jobs in Bank of Ireland and Ulster Bank respectively in recent times, we may be on the verge of having another woman take one of the most senior financial roles in the State.

With Central Bank governor Philip Lane looking certain to win the State’s first executive seat at the European Central Bank in May, his deputy, Sharon Donnery, is the hot favourite to become the first female head of the regulator.

Change is also afoot over at AIB which is said to be conducting an exclusively internal search to find its next chief financial officer, with speculation focusing on Donal Galvin who is currently group deputy finance chief and treasurer.

Staying with financial services, members of the main union representing workers at Ulster Bank have voted in favour of a proposed average 3 per cent pay rise this year for most of its staff in the Republic.

On mortgages, Bank of Ireland increased its rates for longer-term fixed loans but cut the rates on shorter-term mortgage loans. Five- and 10-year fixed rates have been increased by 0.2 of a percentage point to 3.2 per cent and 3.5 per cent respectively.

At the same time, the bank has reduced its one and two-year rates to below 3 per cent, down 0.1 of a percentage point to 2.9 per cent. Its three-year fixed rate remains unchanged at 3 per cent.

Figures from the Banking and Payments Federation this week showed the value of mortgages taken out in the Republic last year rose nearly 20 per cent to €8.7 billion, with first-time buyers continuing to represent the biggest segment of the market.

Elsewhere, thousands of customers of Permanent TSB face charges of up to €72 a year on their current accounts as the bank makes it more difficult to qualify for free banking.

The crossover between big corporates and politics came to the fore again this week as Facebook announced plans to set up an “election integrity” centre in Dublin, while Irish explorer Falcon Oil and Gas was drawn into a massive corruption scandal in South Africa.

The new regional operations centre at Facebook’s Dublin campus will deal with the spread of “fake news” in Europe; a similar centre in Singapore will focus on election integrity in Asia.

Meanwhile, in South Africa, a whistleblower implicated Falcon Oil and Gas at a commission of inquiry investigating public sector bribery and fraud. Angelo Agrizzi, a former chief operating officer of facilities company Bosasa, claimed Falcon approached the firm and offered it facilities contracts in return for help to get restrictive fracking legislation in South Africa amended.

According to the whistleblower, Bosasa bribed former South African president Jacob Zuma to influence policy changes to advance its business interests and get protection from investigations into its alleged corrupt activities.

Back home, and new Irish company Echelon announced a €1 billion development of two data centres, one at Clondalkin in Dublin and the other in Arklow, Co Wicklow. More than 900 jobs will be created for the construction phase.