Guinness makes said it would buy back €755m of shares 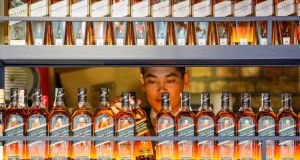 Guinness maker Diageo beat half-year earnings and sales forecasts on stronger demand from China and India and said it would buy back £660 million (€755 million) of shares, sending its stock to a new high on Thursday.

Shares in the maker of Johnnie Walker Scotch and Smirnoff vodka, which also raised its dividend by 5 per cent, climbed as much as 4.3 per cent to to top Britain’s FTSE-100 index.

Diageo said organic net sales - excluding currency moves and one-off items as well as acquisitions and disposals - leapt 20 per cent in China, helped by strong demand for Scotch and Chinese white spirits and allaying concerns of any impact from a slowdown in the world’s second-largest economy.

“Diageo has the strength of brands and global reach to be able to prosper in almost any environment. Diageo generates a lot of cash and the company threw off another £1.3 billion in these last six months alone,” said Steve Clayton, manager of Hargreaves Lansdown Select funds.

French rival Remy Cointreau also struck a confident tone over its prospects in China this month.

Diageo has been restructuring in recent years to improve performance and streamline its portfolio by selling non-core businesses and underperforming labels, while trying to bulk up on newer, hipper brands. It has looked to focus on its Scotch business and grow its operations in India and the United States.

In India, organic net sales rose 12 per cent in the six months ended December 31st from a year earlier, when the country’s top court imposed some restrictions on alcohol sale.

Diageo stuck to its overall forecast for mid-single-digit organic net sales growth for the year ending June 30th, and for a 175 basis point increase in its operating margin for the three years to that date.

Earnings of 77 pence per share, excluding one-time items, also beat forecasts of 71.4 pence, according to a company-supplied consensus.

Diageo said it booked an exceptional pretax gain of £154 million from its recent sale of 19 lower-end brands, including Seagrams VO Canadian whisky, for $550 million (€479 million).

The company said the latest share buyback would take the total repurchase programme to up to £3 billion for the year ending June 30. – Reuters