Housing costs: How Dublin compares with other global cities

Dublin is one of the least-affordable places to buy a house, says Knight Frank report 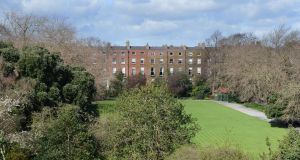 Dublin is embracing the concept of co-living, but it’s very much only at the top end of the market. Node, for example, has rooms costing up to €1,875 a month in its location off Fitzwilliam Square. Photograph: Cyril Byrne/The Irish Times

London, Sydney, Vancouver . . . and Dublin. They’re the cities most popular with Irish people – whether they’re living at home or not.

However, as a new affordability report clearly shows, they’re also some of the world’s least-affordable places to live, with the amount of income one can expect to earn in each city often not enough to live on adequately.

House price growth is obviously one part of the equation; while it may be finally easing in Dublin, half a decade of double-digit growth has nonetheless pushed the cost of owning a home out of the reach of many.

But another element to affordability is how much you earn. If incomes are rising at the same rate as house prices, then affordability should stay level. But in Ireland, and in many other countries across the globe, rising property prices have been compounded by wage stagnation. Pay rises have only returned in recent years and continue to significantly lag house price growth.

Ireland isn’t alone in this. As a new report from Knight Frank shows, global house prices have risen by six percentage points more than incomes since 2016, and some cities have fared worse than others.

So, how does Dublin fare? And where are the most affordable cities to live in?

Dublin in second tier of affordability

To assess affordability globally, Knight Frank monitored 32 cities, looking at how they perform on the ratio of house prices to income; rent as a proportion of income; and real house price growth compared to real income growth.

And, for anyone looking to buy or rent in Dublin, the results won’t surprise. Dublin is now one of the least-affordable places to buy a home across these 32 cities – but it’s not the worst. It’s in the second tier of affordability, behind places such as Amsterdam and Sydney.

The lack of suitable supply is a key factor cited in the report for this.

“Dublin’s strong economic performance over the last six years has led to an increasing demand for housing. However, the new housing supply has failed to keep pace,” it says, adding that expensive debt, stringent minimum design standards and the Central Bank’s mortgage lending rules were other factors.

Another reason why Dublin is in this cohort is because of the growing differential between house price growth and incomes. Dublin has experienced the third-fastest rate of house price growth in the survey over the last five years, up by a staggering 61.9 per cent.

Although it has also had a relatively strong rate of income growth over the same period – up by 13.2 per cent – that still means there is a huge gap between the rates of increase.

Typically, an “affordable” house is considered one that costs about three times your income (hence the Central Bank’s rule of borrowing up to 3.5 times income).

But this could yet improve. “Design standards and the planning process have changed, which are helping to address development viability issues,” the report says, adding that supply is being boosted in the rental market by the growth of the build-to-rent sector.

But if Dublin is in the second tier of least-affordable cities, what cities are in the top tier? Well, emigrants down under or across the Atlantic possibly won’t be surprised at the inclusion of Auckland, San Francisco, Vancouver, Toronto and Sydney on the list.

It seems that Irish people can’t avoid the spectre of unaffordable house prices. The places that tend to be the most popular with Irish expats are also the places with the most expensive house prices, a factor perhaps, of the jobs that pull more people to these locations, creating more demand and thus putting upward pressure on prices.

Of more surprise, perhaps, is the inclusion of Amsterdam, but a key factor across many of these cities has been that real house prices have outstripped real income growth. In the Dutch capital, for example, house price growth has exceeded income growth by 59 per cent, while it’s of the order of 46 per cent in Vancouver and 32 per cent in Auckland.

“This evident disparity between the two indicators is a clear contributing factor to these cities falling into the ‘least affordable’ quadrant,” the report notes.

In Toronto, another favourite with Irish emigrants, prices have soared by 46.4 per cent – but incomes are up by just 8.4 per cent. Berlin has also seen rapid price growth – the fastest in the survey at 63.4 per cent – with incomes up by just 7 per cent.

Cities in this cohort have an average house price-to-income ratio of 10 per cent; residents spend an average of 39 per cent of their income on rent – although in one city the percentage rises to more than 50 per cent; and the difference between house price growth and income growth is about 33 per cent.

The most affordable cities

But if many cities are becoming unaffordable, where might be a better place to live? It might surprise, but Dubai, not known for cheap anything, is actually one of the more affordable places to move to. One of the reasons for this is that while household incomes have fallen of late, down by 10.6 per cent over the last five years, house prices have also fallen, down by 2 per cent.

Brazil’s Sao Paolo and Kuala Lumpur in Malaysia also merit the “most affordable” moniker, while house price growth has also stalled in Paris, pushing it into the “second most affordable” category.

Dwellers of the most-affordable cities spend as little as 11 per cent of their income on rent, while house prices are as low as double the average income.

Where do people own their own homes?

The survey also considers home ownership rates across the areas examined. Ireland now has a home ownership rate of 68 per cent – down significantly on 1991, when the numbers owning their own home reached a peak at about 80.1 per cent, one of the highest rates of home ownership in western Europe at the time.

But the fall is very much in line with international trends. Canada, for example, now has the same home ownership rate as Ireland, while Australia’s is slightly lower, at 67 per cent, and, in the UK, the rate has dipped significantly lower, to just 63 per cent.

When looked at on a cities basis, in Dublin, unsurprisingly, the rate is even lower, at just 60 per cent. This means it is now lagging other major cities, such as Sydney (66 per cent); Toronto (67 per cent); and Vancouver (64 per cent).

On the other hand, in London, just one in two dwellers are now homeowners, a similar level to New York, while just 15 per cent of residents of Berlin own their own home.

It’s not just in Dublin where housing has become unaffordable. But while we continue to grapple with developing affordable homes and trying to get rent controls to work, other cities have taken a different approach.

San Francisco, home to Silicon Valley, has seen price growth of 70 per cent over the last 10 years, and the city might offer some lessons to Dublin in how to alleviate affordability pressures for both homeowners and renters alike.

One innovation has been the concept of co-living. This leads to developments that are smaller than traditional individual apartments. They include a private bedroom with an ensuite bathroom, complemented by communal space. While Dublin has moved in this direction, it’s very much only at the top end of the market. Node, for example, has rooms costing up to €1,875 a month in its location off Fitzwilliam Square.

Other innovations in San Francisco include companies such as Facebook and Google creating staff housing, and a new movement that encourages development, YIMBYism (Yes In My Back Yard).

In New York, issues with rising property prices and rents have been compounded by population growth

London is also struggling with affordability. It says it needs 64,935 new homes every year to meet the growing demand for housing – and of these, about two-thirds should be “affordable”, which means that households earning up to £60,000 a year should be able to afford them.

Shared ownership is one initiative undertaken in the UK. It allows Londoners with household incomes of up to £90,000 (€114,297) to purchase a share of between a quarter and three-quarters of a property, and pay a low rent on the remaining portion. Owners can buy additional shares in the property over time.

In New York, issues with rising property prices and rents have been compounded by population growth; between 2000 and 2016, the Big Apple’s population rose by 11 per cent, while its housing stock grew by only 8 per cent.

While a big bonus of New York is its long-standing rent control regime – more than half of the city’s 2.2 million housing stock is rent-regulated in some form – many residents are locked out of this. So the city has looked to different ways of boosting its housing stock, such as building micro-apartments of just 384sq ft.

Caesura, a Brooklyn development, was built by a private developer in conjunction with New York’s department of housing preservation and development. About 40 per cent of its units are available at below market rate, of about $886-$1,482 a month.

1 Council tells Johnny Ronan firm to keep the noise down at D4 Embassy venue
2 How to . . . keep your kids safe playing Fortnite
3 Who are Ireland’s 17 billionaires?
4 How to . . . move (almost) everything to your new phone
5 Are there annual limits on inheritances or gifts to a child?
6 RTÉ’s multiple lobbying meetings with politicians
7 ‘We get on with things despite the politicians’
8 If you have any assets overseas you need to read this
9 Can I get my ex-partner’s name off my mortgage?
10 Q&A: What the motor tax changes could mean for you
Real news has value SUBSCRIBE
Save money on international transfers