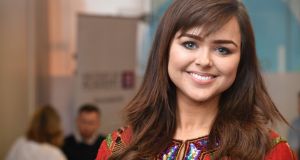 Izzy Wheels founder Ailbhe Keane: start-up that creates a range of customised spoke guards for wheelchairs was the second runner-up at the AIB Start-up Academy 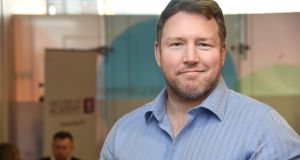 The first runner-up at the AIB Start-up Academy was Frankman which produces men’s grooming products. The second runner-up was Izzy Wheels which creates a range of customised spoke guards for wheelchairs.

“To say we were surprised would be a huge understatement,” said Michael Swift, cofounder of Frankman.

“On the night we felt that our pitch went reasonably well but because we were up against such strong competition we really didn’t know how it would go. Like any start-up in the pre-revenue phase, validation gives you more credibility when approaching suppliers or attracting new customers.

“Also, the marketing support prize for a company like Frankman that needs to make a big splash at launch will make a massive difference in rapidly raising awareness,” said Swift.

Each runner’s-up prize will include an advertising spend with The Irish Times across print and digital, AIB Coaching and an Irish Times masterclass on how to write a press release.

Frankman Grooming is a “straight-talking male personal-care company that cuts through the bull. Swift is a former Connacht rugby player now living in Dublin. He cofounded Frankman with his wife Gill and they will launch in August this year.

“Our range of five innovative multi-use hair styling products (priced between €7 to €9.50) allows guys to achieve the look they want without a degree in hair styling. It’s all hands to the deck now geared towards an August launch,” said Swift.

Sarita Johnston, senior development advisor for High Potential Start-ups Enterprise Ireland, was a judge on the judging panel at the final. She said: “Swift identified clearly in his pitch that there was a gap in a growing market, and how they were going to address that gap in terms of high price point products.

“I found the name really interesting. It would be fantastic to see an Irish equivalent to the likes of what Marissa Carter has done with her product range, Cocoa Brown.”

Ailbhe Keane from Izzy Wheels said she was “absolutely thrilled” to win the runner’s-up place at the final.

“Our mission from the beginning is to bring disability fashion to the forefront. The incredible prize that the Start-up Academy has awarded us will greatly boost our ability to spread our message. The prize is absolutely golden for any start-up,” said Keane.

Izzy Wheels was inspired by Ailbhe’s sister Isabel who was born with spina bifida and as a result is paralysed from her waist down. “She has been a wheelchair user all her life and growing up it really frustrated her how little was available to her to personalise her chair.

“When I was in my final year in the National College of Art and Design I created Izzy Wheels to make Isabel feel empowered about her wheelchair. Izzy Wheels is a range of personalised spoke guards for wheelchairs that transforms them from more than a medical device, it also becomes a piece of fashion and self-expression. I named it after her and our tagline became: ‘If you can’t stand up, stand out.’” said Keane.

“The girls themselves were so dynamic and enthused energy and ambition and I loved that, they are a fantastic young company. From an Enterprise Ireland perspective, we see huge opportunities in different cohorts and youth entrepreneurship is one cohort we want to encourage.

“Izzy Wheels is making a product wheelchair users use on an everyday basis more enjoyable and more fashionable. They can change the product as often as they like, which I really liked. Competing products could not be replaced without a lot of difficulty. For such a young team they had really thought about growth opportunities and potential add-ons to the product range,” said Johnston.

Izzy Wheels launched their online store izzywheels.com last year. “A set of spoke guards costs €99,” she said. “For our summer collection, launching in June, we have an amazing line-up of Irish and international artists designing spoke guards including Maser and James Earley. We will give a percentage of all sales to Spina Bifida Hydrocephalus Ireland.”