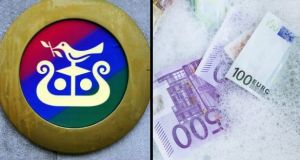 AIB said a “comprehensive risk mitigation programme” has been put in place to resolve all of the issues. Photograph: Cyril Byrne

AIB has been fined €2.275 million by the Central Bank for failing to report potentially suspicious monetary transactions promptly to the Garda and Revenue.

It said the breaches were the result of “significant failures” in AIB’s controls, policies and procedures.

This is the biggest fine levied against AIB by the Central Bank and follows a €3.325 million fine issued last year to Ulster Bank for similar breaches.

The AIB breaches followed the enactment of the Criminal Justice Act 2010 and occurred until July 2014.

The Central Bank found that AIB failed to apply adequate resources to ensure that alerts of potentially suspicious activity – in a backlog at its EBS subsidiary – were promptly investigated and reported to the Garda and Revenue Commissioners.

AIB’s anti-money laundering unit took more than 18 months to fully address the backlog, which at one point stood at over 4,200 alerts outstanding for 30-plus days.

The regulator found that AIB failed to ensure that senior management received adequate information on the volume and duration of alerts awaiting investigation. In addition, AIB failed to report 211 suspicious transactions that were identified from the backlog to the Garda and Revenue as required by legislation.

Derville Rowland, the Central Bank’s director of enforcement, said banks must have “rigorous and robust” processes for the identification, assessment and reporting of suspicious customer activity. “It was particularly concerning that sufficient resources were not applied promptly to investigate a substantial backlog of alerts of potentially suspicious activity.”

AIB said a “comprehensive programme” had been put in place to resolve all of the issues, adding that it had “fully co-operated” with the Central Bank.