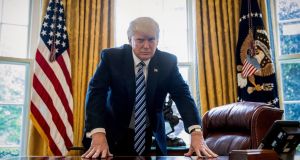 US president Donald Trump: likely to face resistance in Congress where Republicans are wary of any measure that might increase the deficit. Photograph: AP

President Donald Trump has proposed a cut in US corporation tax to 15 per cent at an announcement on Wednesday evening, secretary of the treasury Steven Mnuchin has confirmed. The much-heralded tax reform plan could, if enacted, cut the future flow of foreign direct investment out of the US to countries such as Ireland.

Announcing the move at a briefing in Washington, Mr Mnuchin described the corporate tax proposals, which are accompanied by plans for personal taxation reductions, as “massive”. He said the US government was still “working on lots of details” attached to the initiative, but claimed it would pay for itself through economic growth and the closure of tax loopholes. He did not provide any details of how this would work in practice.

“The economic plan under Trump will grow the economy,” Mr Mnuchin said. “We are at a historic moment.”

Mr Trump has been pushing for the corporate tax rate to be reduced to 15 per cent since his election campaign, though he still faces a battle to win Congressional approval. If the change becomes law, it would more than halve the current rate and bring it close to the Republic’s rate of 12.5 per cent.

Tax experts say that the change would be unlikely to lead to a major departure of companies already in Ireland. However the existing tax incentive for US companies to invest overseas would be reduced, and so the flow of future FDI out of the US could lessen.Indications that there will be no early move on a separate measure to tax imports into the US comes as good news to Ireland, however, as this would have hit sectors such as pharma which export significantly to the US market.

The move would mean a radical shake-up in the US tax system, but Mr Trump is likely to face resistance in Congress where many Republicans are wary of any measure that might increase the deficit.

In particular, senior Republicans such as house speaker Paul Ryan have expressed caution at any move that would not be matched by alternative funding. However Mr Ryan said today that he had seen the Trump plan and approved of 80 per cent of it, suggesting some compromise maybe possible.

The initial reaction from Ireland is that much will depend on the detail of what is eventially agreed. Miniser for Finance Michael Noonan held discussions with Mr Mnuchin in Washington rcently, but has said that is is not yet clear where the US proposals will “ land.”

Mr Mnuchin has said that the cost of the tax cuts proposed on Wednesday would be offset by economic growth. Mr Ryan has been a strong supporter of a proposed border-adjustment tax which would tax imports coming into the United States and help offset any cut in the corporate tax rate. It is estimated that a border adjustment tax could generate up to $1 trillion and help pay for other tax reductions.

But that idea has been losing support among many Republicans who fear its impact on importers and consumers, which may leave a dilemma about how the cuts will be funded. The Trump administration will argue that higher growth will help to pay the bill. President Trump is also expected to announce a special incentive tax rate of 10 per cent for profits held offshore by US companies which are repatriated to the US.

The negotiations over corporate tax are tied in with high-stakes budgetary discussions this week on Capitol Hill as the US government works to avoid a shut-down this weekend. Lawmakers must pass a series of measures on budgetary spending before funding streams for some federal agencies expires at midnight on Friday.

Mr Trump is seeking approval for funding for his controversial wall between the US and Mexico, which the department of homeland security estimates could ultimately cost more than $21 billion. But there are reports that Mr Trump could accept a commitment to fund the wall at a later date.

Speaking on Fox News on Tuesday, Trump adviser Kellyanne Conway said: “Building that wall and having it funded remains an important priority to him but we also know that that can happen later this year and into next year, and in the interim you see other smart technology and other resources and tools being used toward border security.”

The call by the White House for a 15 per cent corporate tax is likely to be the opening gambit in a complex negotiation process likely to lead to a higher tax rate.

Negotiations were continuing between the House and Senate leadership and the Trump administration, represented primarily by the director of management and budget Mick Mulvaney in a bid to secure a deal before the weekend.

With the US president approaching the 100-day mark of his presidency this weekend, he is eager to push through a number of legislative proposals.

Lawmakers on both sides of the divide are keen to avoid the government shutdown which effectively closed government agencies for 17 days in 2013 and became a symbol of the tensions between the Obama administration and Congress.