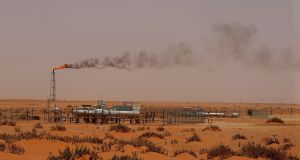 The prospectus for Saudi Arabia’s sukuk issuance advises investors to note the adverse effect the low oil price is having on the economy. Photograph: AFP/Getty Images

The arrangers of the sukuk include HSBC and JP Morgan while one of the dealers is Deutsche Bank.

The issuance has been listed through KSA Sukuk Limited, a special purpose vehicle incorporated in the Caymen Islands and wholly owned by the government of Saudi Arabia.

In the bond prospectus, investors are advised to note the adverse affect that the current low oil price is having on Saudi Arabia. “Sectors such as education, healthcare and housing may, indirectly, be adversely affected by lower levels of economic activity that may result from lower government revenues from the oil sector.”

The prospectus also warns investors of the fact that Saudi Arabia has seen its credit rating downgraded by both Fitch and Moody’s in the last 15 months, with both ratings agencies citing a fall in oil prices as the reason for the deterioration of Saudi Arabia’s credit profile.

Other gulf sovereign bond listings on the ISE include Kuwait, Jordan, Oman and Bahrain. “This confirms the Irish Stock Exchange’s popularity with sovereign and corporate issuers from the Middle East,” said Gerard Scully, director of international primary markets at the ISE.

Statistics released by the ISE show it lists over 29,000 bonds from 85 countries.

Demand for medicines lifts Irish goods exports 8% in first half 17:04
Anti-money laundering rules to be made law after State fined €2m for delays 16:58
Irish grass-fed beef could get special EU status 16:53
Virgin Media vows to withhold sports channels until Eir ‘pays its bill’ 16:51
Avoca warns of redundancies due to coronavirus 16:44