Wagamama parent slumps to €96.5m loss in first half of year 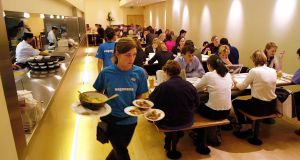 Wagamama drove Restaurant Group to a 58 per cent increase in total sales but it slid to a loss.

The Restaurant Group is looking to exit a number of Chiquito and Frankie & Benny’s sites to stabilise its long-term future after posting hefty losses.

The group, which also owns Wagamama, posted an £87.7 million (€96.5 million) pre-tax loss in the six months to June 30th, falling from a £12.2 million profit in the previous year, as it was weighed down by impairment charges related to its leisure estate.

Like-for-like sales for the period rose by 4 per cent, the company said, as total sales surged on the back of its £559 million acquisition of Wagamama in October 2018.

Wagamama drove the company to a 58 per cent increase in total sales to £515.9 million for the period.

It added that it is planning ahead for the “uncertainties” created by a no-deal Brexit in mind. “Regarding Brexit, the supply of food and labour are the two issues we want clarity on and are working to ensure we are as prepared as possible,” non-executive chairwoman Debbie Hewitt said.

The half-year figures were the first results since the company appointed former HBOS chief Andy Hornsby as its new chief executive. – PA