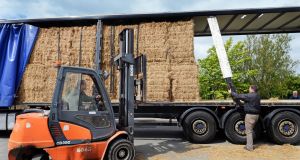 Fodder and water shortages due to extreme weather events had taken a toll on farmers this year, the IFA said. Photograph: Eric Luke

Irish farmers are encountering “the perfect storm” of this year’s extreme weather events, imminent exposure due to Brexit, and a battle to maintain CAP funding, the Irish Farmers’ Association has warned.

In such circumstances, a strong 2019 budget supporting farmers was needed, given immediate threats and long-term challenges facing the sector, IFA president Joe Healy said at the publication of the group’s pre-budget submission.

“Extreme weather events this year have placed huge additional pressure on farm families and farm incomes. In the medium term, both the exposure to Brexit and the battle to maintain CAP funding for Ireland have created the perfect storm.”

The IFA’s message to the Government was that the future growth of the sector was “intrinsically linked to support for farm incomes and policies that encourage investment at farm level”.

Fodder and water shortages due to extreme weather events had taken a toll on farmers and “the implementation of our budget proposals can give them a signal their role is recognised”, he said.

Mr Healy added that average farm incomes last year were some €31,000, significantly behind averages in other sectors. He said this figure was not set to change this year.

IFA’s priorities for the budget include targeted payments of €200 per suckler cow and an additional sheep payment of €5 per ewe; increased funding of €73 million for Areas of Natural Constraint to reverse cuts in place since 2009 and an allocation of €250 million for agri-environmental schemes.

It also calls for provision of low-cost loans to support ongoing working capital requirements and for on-farm investment; measures to encourage the use of renewable energy on farms, and funding to meet the Government commitment to introduce a three-year cap on the inclusion of productive assets under the Fair Deal Scheme for nursing home care.

On taxation, the IFA is seeking an increase in the Earned Income Tax Credit from €1,150 to €1,650, and the retention of measures that encourage the transfer of farm ownership. In addition, it is also proposing a series of measures to counter income volatility for farmers with Brexit looming.

“In light of the recent severe drought conditions and their impact on an already difficult fodder situation, I am introducing a support measure contributing to the cost of importing fodder from abroad,” he said. “This additional commitment to securing adequate fodder supplies builds on a range of supports already put in place.”

It is being introduced to reduce the cost to farmers of imports such as hay, silage, haylage, and alfalfa. While the measure would operate through co-operatives and registered importers and will cover forage imported from August 12th to the end of the year, Mr Creed stressed the beneficiaries would be farmers.

Mr Healy welcomed the move, particularly as “some co-ops and merchants have identified available fodder abroad and this allows them to put their plans in place”.

1 Fianna Fáil may have just pressed the pause button on the property market
2 UK to prioritise EU trade deal over one with United States
3 Who are Ireland’s 17 billionaires?
4 State ranked highly for attracting skilled workers but low on gender issues
5 Dunnes premature in challenging Point Village resolution move, Supreme Court finds
6 Are there annual limits on inheritances or gifts to a child?
7 My father in a nursing home wants to gift me his house
8 Belfast regeneration project worth £500m gets green light
9 European investor acquires Harcourt Road offices for €55m
10 Ireland ranked second in Europe for data breach notifications
Real news has value SUBSCRIBE