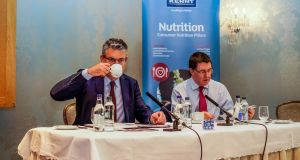 The impact of sterling’s fluctuation caused a 0.6 per cent dip in the trading margin of Kerry Group’s consumer foods business to 7 per cent but its €30 million expenditure on a Brexit mitigation fund means the group is confident the UK’s decision will have a “limited impact” on its overall business.

At a presentation after the group’s interim results on Thursday, outgoing chief financial officer Brian Mehigan said the company has a “sophisticated ‘what if’ plan” for each of its businesses and noted its consumer foods business was “performing quite well from a margin perspective”.

Kerry Group, which produces brands including Dairygold, Low Low, Denny and Galtee, said trading profit increased by 0.5 per cent to €340 million during the first six months of the year, but that was limited by adverse currency movements.

Its consumer foods division, which represents around 20 per cent of revenues and 10 per cent of profits, suffered marginally in the UK as retailers reduced their marketing efforts. In its ready meals category, which focuses primarily on Indian and Chinese foods, the warm weather adversely affected sales in the period. Nevertheless, revenues in the consumer foods division reached €684 million, representing growth of 1.3 per cent.

Kerry Group chief executive Edmond Scanlon explained that Brexit will have a “limited impact to our overall business”, adding that the group’s strategy to manufacture in the country it sells in is working well.

“We’ve about 24 manufacturing facilities in Britain and 24 in the rest of Europe so we’re well spread geographically,” he said.

Kerry Group’s business is, however, increasingly focused on the Americas, with revenue there falling 2.4 per cent to €1.3 billion in the period. That compared to revenues of €700 million in Europe and €537 million in Asia Pacific, the Middle East and Africa.

Having completed acquisitions this year worth €120 million, Kerry Group still has significant buying potential that it expects to deploy by the end of the year. The company previously guided it planned to spend between €400 million and €800 million on acquisitions in the year.

Its acquisitions thus far boosted group revenue by 1.4 per cent to €3.2 billion and, as a result, the company upped its earnings per share growth of between 7 and 10 per cent. It also announced an interim dividend of 21 cent per share, representing an 11.7 per cent increase over the 2017 dividend.