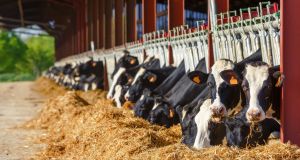 Fodder and water supply shortages are the devastating consequences for farming communities of climate change, Minister for Environment Denis Naughten has said.

“Events like these can be catalysts for change as they make us think differently about how we use our energy, our land and our water,” he told an energy in agriculture event at Gurteen College on Tuesday.

He said everyone needed to focus more on conservation and energy efficiency “if we are to deliver the societal change that is needed to address these challenges”.

He cited the recent introduction of a new support scheme for renewable heat; a revised renewable electricity support scheme, a pilot microgeneration scheme and the expansion of a “smart farming” programme as “real opportunities for rural Ireland and for the farming community” to benefit from renewable energy and help tackle climate change.

He accepted there were issues about securing grid connections for renewable energy projects, which he had raised with EirGrid and ESB Networks. Projects which generate energy before 2020 and help Ireland meet demanding EU targets were being prioritised, he said. These would not be confined to onshore wind but also include solar and biomass.

IFA president Joe Healy said a large attendance at the event was evidence of strong interest among farmers, “but they will need certainty around their plans”, he added – as they had seen too many false dawns with Mischanthus and Willow crops.