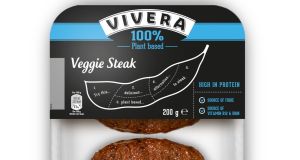 The Veggie Steak, manufactured by Dutch firm Vivera, will be stocked alongside conventional fresh meat products at Tesco’s 42 Irish stores

Tesco is aiming to tap into the growing vegan market in Ireland with the launch of a new plant-based steak, which is said to be “barely distinguishable from the real thing” in taste, texture and smell.

The Veggie Steak, manufactured by Dutch firm Vivera, will be stocked alongside conventional fresh meat products at the retailer’s 42 Irish stores from this week.

The product, which will cost €4 for a pack of two, is made from wheat and soy protein and lays claim to being the first 100 per cent plant-based steak product.

Tesco UK this week also launched its first vegan burger made by California-based protein brand Beyond Meat. It plans to launch the product in Ireland after Christmas.

Unlike “lab-grown” meats in development elsewhere, the Beyond Meat burgers are made from pea protein, coconut oil and potato starch, and contain beetroot juice to give them a red-meat appearance. They also bleed and brown when cooked in an attempt to mimic traditional red meat. They were a sell-out when launched in the US in 2016 .

“With Vivera, it’s an entirely plant-based product that’s made to imitate the look, flavour and texture of traditional animal-based steak; including the use of natural, plant-based colouring to create the pink centre,” Tesco Ireland’s fresh and frozen foods director Joe Manning said.

“It’s ideal for customers seeking to add something different to their diet when it comes to meat-free alternatives,” he said.

The proliferation of substitute meat products poses a serious threat to the traditional meat industry. US beef manufacturers recently filed a petition to exclude non-animal products from the definition of meat.

While red meat consumption has long been been associated with increased rates of coronary heart disease, stroke and Type 2 diabetes, red meat production in terms of land use, depletion of freshwater resources and pollution is also a major driver of global warming.

Ireland is the fourth biggest beef exporter in the world and beef is the single biggest component of the State’s €12 billion food and drink export business.

However, the industry here, which is heavily subsidised by Brussels, is implicated in the State’s inability to curtail its greenhouse gas emissions with 40 per cent of emissions coming from agricultural activity.

Commercial vacancy rates increased in all provinces last year 04:00
Solar panels: How do they work - and are they worth it? 03:45
US stocks have worst day in two years as coronavirus fears spread 21:22
Some €436bn wiped off European stocks as coronavirus fears increase 20:40
Profits fall at production company behind Brendan O’Connor’s Cutting Edge show 19:45