Glanbia picks up momentum as group is on track for growth 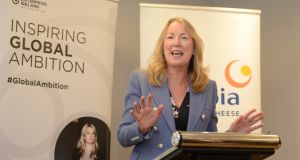 Glanbia’s business picked up momentum in the third quarter of the year as volumes increased and demand for its products grew. Revenue rose 3.7 per cent on a constant currency basis in the Irish food group’s wholly-owned businesses for the nine months ended September 29th 2018, with volumes up 6.7 per cent in the period.

The impact of foreign currency exchange rates saw that revenue increase fall off to a 2.6 per cent decrease compared with the same period in 2017, with the weakness in the US dollar chiefly to blame.

Weaker dairy markets and a focus on brand investment saw pricing fall 4.1 per cent on the same period in 2017. Acquisitions delivered a 1.1 per cent volume increase.

Glanbia’s performance nutrition division saw revenue rise 4.7 per cent on a constant currency basis in the first nine months of 2018, with volume growth of 6.7 per cent and the Body & Fit acquisition delivering 2.4 per cent growth, which was offset by a pricing decline of 4.4 per cent. The company reinvested input cost savings in brand investment, innovation support and dealt with foreign exchange headwinds.

The company said the outlook for the sector for the full year was good, and reiterated its guidance of like-for-like branded volume growth in the mid-to-high single-digit range.

The company bought SlimFast for $350 million in early October, a transaction that is expected to close before the end of 2018.

Glanbia nutritionals saw revenue rise 3 per cent on a constant currency basis, with volumes up 6.8 per cent. That rise was offset by a price decline of 3.8 per cent.

During the period Nutritional Solutions revenue rose 0.7 per cent, with volumes climbing 7.3 per cent. Prices were down 6.6 per cent on lower dairy prices.

Revenue in the US cheese sector rose 4.8 per cent, with volumes up 6.4 per cent and prices down 1.6 per cent.

The group’s joint ventures saw a 5 per cent increase in revenue from continuing operations as volumes rose 8.4 per cent. Prices fell 3.4 per cent as dairy markets declined.

Net debt at the group was €398 million, a decrease of €84 million compared with the end of the third quarter of 2017.

Siobhán Talbot, group managing director, said the year was progressing as planned. “We continue to execute our strategy and, in addition to growth in our core business, we recently announced the acquisition of SlimFast which will further enhance our portfolio.”

The group reiterated its guidance for the full year, predicting adjusted earnings per share for the continuing group will grow between 5 per cent and 8 per cent.