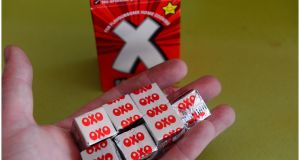 The chief executive of Oxo-cube maker Premier Foods is stepping down under pressure from an activist investor after failing to halt a share price slide since a proposed takeover fell through two years ago.

The company also said on Tuesday it was in talks to sell its Ambrosia rice pudding and custards brand to cut a debt pile that exceeds £500 million (€574 million) and laid out plans to speed up investments in marketing and high-return capital projects.

Gavin Darby has led the Mr Kipling cake company since 2013 but was wounded in July when almost 41 per cent of shareholders backed an attempt to oust him led by activist hedge fund Oasis Management.

Mr Darby had faced pressure to revive the business after Premier rebuffed a takeover approach from US food maker McCormick in April 2016, since when shares have lost a third of their value.

Mr Darby said it was the right time for him to go and denied that it was connected with the shareholder revolt.

“Having today announced a new strategic initiative for the business, I have decided to step down as chief executive on January 31st, 2019, which will mark the sixth anniversary of my joining Premier Foods,” he said in a statement.

Oasis was pleased at the change of leadership.

“We welcome Gavin Darby’s departure, and are optimistic about the path ahead. We look forward to Premier Foods accelerating and realising its true potential,” it said in a statement.

Premier Foods’ top shareholders found themselves on opposing sides of the battle to oust Darby with the largest investor – Japan’s Nissin Foods Holdings – backing him.

Shares of the company were up 2.2 per cent by mid-morning.

Trading profit for the company, whose other brands include Bisto gravy, rose 6.3 per cent to £51 million (€59 million) in the 26 weeks ended September 29th, up from £48 million (€55 million) a year earlier and ahead of some analyst forecasts.

It maintained its profit expectations for the full year. Analysts on average are estimating trading profit of £126 million (€145 million), according to company provided consensus, ahead of £123 million (€140 million) last year.

The company has been cutting costs as part of a two-year plan launched in 2017 by laying off people and streamlining its warehousing and distribution network.

It said talks to sell Ambrosia, which accounts for under 10 per cent of its total revenues, were in early stages and that it expects strong demand for the dessert brand.

The company’s plan to sell only Ambrosia is in contrast to Oasis’ demands to sell its Batchelor soup brands.

The company said it will stockpile packaging material and ingredients ahead of Brexit. It added that it would start building an inventory of finished goods in January.