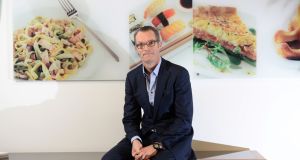 Shareholders in Irish-based food group Greencore have approved the company’s plan to sell-off its US business to Hearthside Foods for $1.075 billion (€935 million).

The surprise move, announced last month, represents a U-turn for the company, which had, as recently as March this year, announced big plans for its US business.

It also comes just two years after Greencore’s high-profile acquisition of Illinois-based Peacock Foods in a bid to transform its US operations.

Nonetheless a resolution on the proposed sale of Greencore USA was passed by 97 per cent of shareholders at an extraordinary general meeting in Dublin this morning.

The UK-listed company plans to use a significant part of the proceeds to fund a special dividend for shareholders, worth 72p per share.

But several shareholders said the company lacked a clear strategy and that the special dividend would incur a significant tax liability for investors.

Earlier chief executive Patrick Coveney had said there was never a plan to sell the US business and the company had received an unsolicited bid.

The price would realise a lot of future value in the business for investors, he said.

Problems with Greencore’s legacy business in the US – prior to the Peacock deal – prompted a profit warning in March and 30 per cent share price slump.

At the time, Mr Coveney said he planned to oversee a restructuring of the US business himself, pledging to spend half his time in the US.

However last month the sandwich maker surprised investors by announcing plans to sell the business to Hearthside Foods.

The deal values Greencore USA at 13.4 times earnings before interest, tax, depreciation and amortisation (Ebitda), compared to the multiple of 10.4 that Greencore paid for Peacock.