Aryzta shares slump 23% on back of capital raise plan 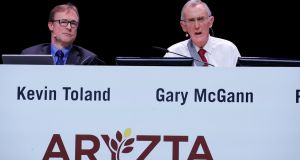 Shares fell by 20 per cent on Thursday directly after investors approved the plan at a tense annual general meeting (agm) in Zurich and by a further 3 per cent on Friday to leave the stock at a low of €6.60.

The embattled company, which makes burger buns for McDonald’s and owns the Cuisine de France brand here, insists the capital raise is necessary to pay down debt and fund a restructuring of the group.

But a significant minority of shareholders (47 per cent) led by its largest investor, Cobas Asset Management, voted against the plan, while others opposed the reappointments of chairman Gary McGann and chief executive Kevin Toland, reflecting the current level of frustration with management among shareholders.

Shares in Aryzta have fallen by more than 90 per cent in the last three years on foot of several profit warnings triggered by a downturn in sales in the US and Europe. The company is also saddled with a monster debt of €1.6 billion following an acquisition spree, which saw the group buy 12 companies between 2008 and 2014.

Some €500 million of the proceeds raised in the planned rights issue will be used to pay down debt. In his address to investors at the agm, Mr Toland pledged to refocus the company on its core frozen business-to-business bakery business.

“This is very quickly becoming what I would call a normal industrial operating group, focused on the customer and the performance,” he said.

The move would technically dilute shareholdings by 90 per cent if investors fail to exercise their rights.