Aryzta identifies key risks to company ahead of rights issue 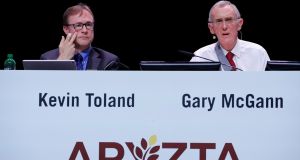 Embattled food group Aryzta has identified a number of key challenges facing the company in the prospectus for its forthcoming rights issue, including the successful disposal of its stake in French frozen food chain Picard.

The company, which makes burger buns for McDonald’s, narrowly won shareholder approval for a €790 million equity raise at its annual general meeting in Zurich last week.

It said the rights issue was intended to create “the necessary strategic and financial flexibility for the company to implement its strategy and to sustainably strengthen its capital base”.

Aryzta said it would use €455 million of the proceeds to pay down debt and a further €285 million to restructure the group.

The strategy to return the company to health after a sequence of profit warnings and missed earnings targets centres on a three-year €200 million cost-cutting programme – Project Renew – and the selling off of non-core assets.

In its prospectus, the company also identified a number of risks to the strategy, including the possibility that it fails to achieve the necessary savings from its cost-cutting programme, which it described as a “complex exercise” involving 200 initiatives and absorbing a lot of management time.

It also highlighted the prospect of failing to get a decent price from its 49 per cent stake in Picard, purchased for €448 million in 2015.

One of the objectives of the upcoming rights issue is to shore up the company’s balance sheet so as to avoid a fire sale of Picard. The company attaches a €420 million “investment carrying value” to its Picard stake. It is hoping to generate €450 million from the sale of non-core assets.

Aryzta also identified “changing dietary trends and the increased emphasis on health and wellness among consumers” as a factor that could impact demand.

“Demand for the group’s products could be affected by consumer concerns regarding the health effects of frozen and baked products or ingredients such as trans-fats, sugar, processed wheat and other product attributes,” it said.

Brexit and the potential for more volatility surrounding the UK’s planned exit from the EU is listed as another challenge facing the group.

Shareholders will have between Wednesday, November 7th and November 15th to exercise their right to acquire the new shares. Bank of America Merrill Lynch and Swiss bank UBS are the chief underwriting banks.

The move would technically dilute shareholdings by 90 per cent if investors chose not to exercise their rights.

The deeply discounted price offered to shareholders on the new shares was larger than expected, reflecting the company’s uncertain market position.