Irish whiskey one of the star performers among spirits as volumes jump 11.3% 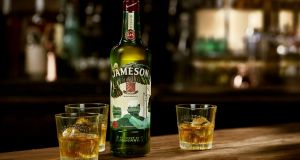 Irish whiskey, led by Jameson, is currently sold in 135 countries and exports are expected to double to 144 million bottles by 2020

New industry figures show Irish whiskey was one of the star performers in the US in 2017 with sales largely concentrated on so-called “high-end premium” and “super premium” products, according to figures from national trade association, the Distilled Spirits Council.

Volumes of high-end premium Irish whiskey brands that typically cost under $200 shot up by 8.2 per cent, while super premium brands such as Redbreast, which cost more than $200, jumped by 46.5 per cent.

Irish whiskey is sold in 135 countries and exports are expected to double to 144 million bottles by 2020. The US is by far and away the most popular destination for Irish whiskey, followed by Ireland, France, the UK and South Africa.

Jameson is the top Irish whiskey in US and across the world with sales of 6.5 million cases last year.

“We are also encouraged to see strong growth in our prestige whiskey brands like Redbreast, Powers and the Spot range reflecting the growing consumer trend towards premium Irish whiskeys and the resurgence of the time-honoured single pot still Irish whiskey.”

According to the latest data from the Distilled Spirits Council, spirits gained market share against beer for the eighth successive year.

The council projected a new export record of $1.63 billion of US spirits sold around the globe last year on the back of sales of American whiskey.

1 Coronavirus: Irish holding back on holiday plans
2 Bank leaked my loan request to family who tried to rip me off
3 Eason acquires rival Dubray Books for undisclosed sum
4 When the Chemistry no longer works – the closing of a leading Irish ad agency
5 Solar panels: Are they worth the investment?
6 Can I see my father’s previous wills?
7 Markets slump as coronavirus spreads around globe
8 Packing company wrapped up in online, design and sustainability
9 What is at stake for Ireland in the new Brexit talks?
10 Appeals board refuses planning for 146 Clonmel homes in ‘fast track’ case
Real news has value SUBSCRIBE