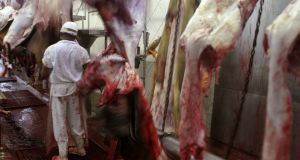 EU rules require cattle in the Republic to have tags and passports identifying each animal, allowing them to be traced through their lives to slaughter and processing

Department of Agriculture officials are close to releasing 60 beef carcasses for processing and possible consumption from a herd whose location was not known for up to two months after it had been moved across the Border.

The department last week detained 60 cattle sent for slaughter from Northern Ireland to a factory in the Republic after it found deficiencies in identification documents required by EU food regulations.

It is understood that the department is close to deciding to release their carcasses for processing, raising the possibility that the meat could be sold for consumption.

EU rules require cattle in the Republic to have tags and passports identifying each animal, allowing them to be traced through their lives to slaughter and processing. If the details on those documents do not match information held in a central Department of Agriculture database, it takes control of the animals.

In this case the 60 animals were born in the Republic, and had tags confirming this. They were part of a herd meant to be located in the northwest and belonging to a farmer based in Co Fermanagh.

While the cattle had been moved across the Border, there were no documents detailing this. The papers indicated the herd was one whose location was not known for up to two months.

A spokesman confirmed that the department’s concerns did not relate to the meat processing company holding the carcasses but would not comment beyond that.

The company has been working with the officials who took charge of the animals. Neither that firm nor the processor in the North would comment.

Following the department’s intervention last week, it instructed the factory in the Republic to slaughter the animals and hold the carcasses pending a decision on what should happen to the meat.

The factory was continuing to hold the carcasses late on Friday. It then emerged that the department favoured instructing that they be de-boned, the first step in processing the meat.

Condemning meat intended for processing is rare. Industry sources say the department will only take this step when it is sure it has grounds for doing so, as among other things it leaves the State open to potential legal claims.

The department has been in talks with the farmer and with the Department of Agriculture, Environment and Rural Affairs in Northern Ireland.

The Department of Agriculture, Food and the Marine said it did not comment on individual cases.

“Decisions on food-chain eligibility are made primarily on the basis of food safety, including ante and postmortem examination, in addition to other relevant issues, including Identification and traceability,” a statement said.

It added that food safety and food edibility checks were carried out under EU legislation.