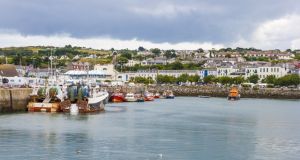 From February 1st, Howth in Co Dublin will be added to the designated ports list. File photograph: iStock

Five additional ports in the State will be opened up for Northern Ireland-registered vessels to allow them land their catches from early next month.

Minister for the Marine Charlie McConalogue confirmed the decision on Monday.

Following Brexit, the only ports in the Republic that vessels registered in the North were allowed to use were Killybegs in Co Donegal and Castletownbere, Co Cork.

From February 1st, three Donegal ports – Greencastle, Rathmullan and Burtonport – as well as Ros an Mhíl (Rossaveal), Co Galway, and Howth in Co Dublin will be added to the designated-ports list.

Under the new designations Ros an Mhíl and Howth will be able to accommodate landings of demersal fish such as cod, hake and haddock from vessels under 24m and will operate Monday to Friday from 10am to 10pm.

Greencastle, Rathmullen and Burtonport will be designated for non-quota species landings from vessels under 18m and will operate from 2pm to 8pm from Monday to Friday.

Seven ports in Northern Ireland were designated to allow continued access for vessels registered in the Republic and the Government was asked to reciprocate.

Up until a conclusion of an agreement on the future relationship between the United Kingdom and the European Union on Christmas Eve, it was unclear whether Northern Ireland vessels that had access to Irish waters would continue to do so.

Safety fears were raised for Northern-Ireland-registered vessels that having only two designated ports would be very dangerous for them as it would involve a six-hour trip from Arranmore, Tory and Inishbofin islands.

Many Northern-Ireland-registered vessels used Greencastle on the Inishowen peninsula to land their catches.

Killybegs Fishermen’s Organisation spokesman Seán O’Donoghue said the deal would make a big difference to 24 vessels from Donegal which had been registered in the North pre-Brexit and found Killybegs to be a port that was too large and far away for their needs.

“This is an important decision which will allow fishers in small vessels to continue their livelihoods in a safe manner,” Mr McConalogue said.

“Following Brexit, it is important now more than ever, to support our fishers and fishing communities and to do all we can to help them continue their livelihoods.”

Alan McCulla of Anglo-North Irish Fish Producers Organisation told RTÉ radio that while the announcement was a step in the right direction, there was still a lot to be done.

“Brexit created the problem, but we knew Brexit was coming and in preparation for Brexit the authorities in the North had designated seven ports right around the coast of Northern Ireland to handle catches from Irish vessels and vessels from other countries, we knew it was coming, we did it.

“Unfortunately the authorities in the south didn’t do anything and kept Killybegs and Castletownbere with only two harbours that were designated up until the announcement today.”

Nevertheless, UK-registered boats landing into any of the seven Irish ports will have to comply with more documentary and procedural requirements than they did before Brexit.

Fianna Fáil party colleague Christopher O’Sullivan called on Mr McConalogue to set up a task force to ensure Irish fisheries were not left stranded by the “unfair” post-Brexit trade deal.

He said the loss of quota for certain species such as mackerel as a result of the Brexit deal would mean a loss of business. Ireland will be expected to lose 26,700 tonnes of its quota to the UK under the deal.

Ultimately, the EU agreed to cede 25 per cent of the value of the roughly €650 million in fish EU boats catch in British waters each year, for a period of 5½ years.

“I’m calling for this task force to be set up immediately. It is necessary to help soften the blow of Brexit and to urgently respond to the undue burden and hardship falling on our fishing sector because of the Brexit deal,” he said.