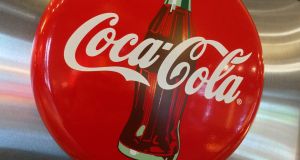 The kind of Chu-Hi drink planned by Coca-Cola typically contains between 3 and 8 per cent alcohol. Photograph: AFP

Coca-Cola is planning a break with 125 years to experiment with its first alcoholic drink as the world’s largest soft drinks company eyes Japan’s growing market for “Chu-Hi” alcopops.

The gambit, which a senior Coke executive described as “unique in our history”, will propel the US company into a competitive alcopop market dominated by Japanese brands such as Strong Zero, Highball Lemon and Slat.

The plans, which Coke’s Japan head said “make sense” given the strength of the Chu-Hi market, have come to light almost four months after a US-based analyst at Wells Fargo speculated in a report that Coke might shortly announce a move into alcoholic drinks.

At an investor event in November, according to media reports, James Quincey, Coke chief executive, did not rule out such a step, but offered no timing or detail on ambitions to brew something harder.

Coke’s Chu-Hi experiment has come to light via the company’s own website, which last month uploaded the text of an interview with Jorge Garduño, president of its Japanese business unit.

In answer to a question about what new products he anticipates bringing to market in 2018, Mr Garduño is quoted as saying that the company will experiment with a product in a category known in Japan as Chu-Hi - “a canned drink that includes alcohol”, traditionally made, he adds, from a distilled beverage called shochu, sparkling water and flavouring.

The Chu-Hi market has hundreds of flavour varieties and, according to figures used by the Japanese drinks group Suntory, has seen growth fluctuate between 5 and 25 per cent year on year since 2013.

Mr Garduno said the plan to enter the market was an example of how the company was exploring opportunities outside its core areas. “Coca-Cola has always focused entirely on non-alcoholic beverages, and this is [a] modest experiment for a specific slice of our market,” he said, adding that he did not think people around the world should expect to see this kind of thing from Coke.

Chu-Hi canned drinks mostly range in alcohol content between 3 and 8 per cent - a profile that has put them in direct competition with beer, and proved particularly attractive to female drinkers. The appeal of Chu-Hi has been enhanced by the relentless trial-and-error approach by major Japanese producers Kirin, Asahi, Takara and Suntory, which have released flavours that include yoghurt, acerola and wild basil.

The total Japanese market for shochu, a vodka-like spirit distilled from potatoes, rice, barley or sugar that provides Chu-Hi with its kick, has expanded by almost 40 per cent since 2011.

The move into alcohol comes as Coca-Cola, like other large food groups, has faced shrinking sales in its core business: fizzy drinks. As a younger generation of consumers shun sugar, Coke has been investing in products in faster-growing segments, such as water and tea.

In the late 1970s Coca-Cola embarked on a short experiment with wines, buying a number of California vineyards and a New York wine company. The culminated in, among other items, the sale of wine in cans on United Airlines flights.

Mr Quincy said last month the company had launched more than 500 new products in 2017. “There’s a lot of focus on innovation,” Mr Quincy told an industry conference in February. “We’re making innovations in Coke, innovations with flavours, innovations with ingredients all around the world...taking it into different categories than it was in before.”