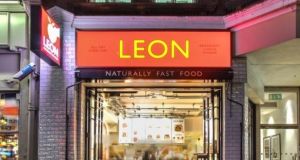 Leon, the multiple award-winning healthy fast food chain loved by critics such as Jay Rayner and Giles Coren, has confirmed it is to open its first outlet in Dundrum Town Centre, but it won’t be until late next year.

Cibus Concepts, a franchise partnership established by Waterford accountant Stuart Fitzgerald and his business partner Brian McIntyre, announced plans to roll out as many as 20 Leon restaurants across Ireland by 2023 in July.

However, while the initial plan was to open the first outlet this year, it has now put off opening its first restaurant here until the last quarter of 2019.

Hammerson, which co-owns the centre with Allianz, is repositioning a number of existing retail units to create four new restaurants, with all of them scheduled to open late next year.

Fallon & Byrne is also set to open a new flagship food hall, delicatessen and restaurant in nearby Pembroke Square.

Having opened its first restaurant in Carnaby Street in London in 2004, Leon has expanded to 66 locations, most of which are in Britain.

Dublin represents the sixth international city location for the company, which has previously opened branches in Oslo, Amsterdam, Utrecht, Gran Caneria and most recently in Washington DC.

The Leon menu includes dishes that predominantly draw on Mediterranean food culture, with Moroccan meatballs, grilled halloumi wraps and kefir smoothies among the offerings. It was co-founded by John Vincent, renowned chef Allegra McEvedy, and Henry Dimbleby, the son of the veteran broadcaster David Dimbleby and food writer Josceline Dimbleby.

Hailed by London Times restaurant critic Giles Coren as “the future of fast food”, Leon is growing at a rate of about 15 new locations a year. It announced plans to open at least 50 sites between 2016 and 2020 and has a longer-term goal of having 500 restaurants up and running by 2026.

“Leon is a quality brand and a great addition to the centre’s culinary mix. It sets the tone for the outstanding dining and leisure environment the Pembroke District will provide for customers,” said Simon Betty, director of retail for Ireland at Hammerson.