Aryzta investors take up 97.4% of rights 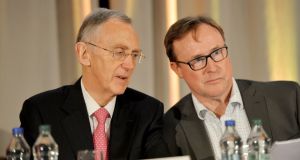 Shareholders were offered rights to 10 new shares for every one they currently own in an exercise that sought to raise €790 million in proceeds before expenses. The money is earmarked for debt repayment and working capital in the business, which has suffered a series of profit warnings in recent years.

Much of the balance are understood to be several hundred long-standing Irish shareholders who were effectively locked out of the deal.

They now find themselves with a stake in the company that is worth less than 10 per cent of what it was before the rights issue. The shareholders, who have been with the company since its foundation in 2008, had already lost 90 per cent of their original investment as the profit warnings badly damaged the company’s stock market reputation.

The rights issue closed formally at noon on Thursday in Switzerland. However, because of the complexity of the process, and the fact that these shareholders had elected to be notified by post, the effective deadline for them was last Monday morning.

Even then, a letter from the London office of Link Asset Services, which managed their shareholdings, said it could not guarantee they would succeed in meeting the deadline.

“We have been informed by the custodian that, in order to exercise rights in relation to the rights offering, such rights must be exercised on or before November 13th, 2018,” the letter said. It asked the Irish shareholders to advise it of their choices by 10am on Monday, November 12th.

The letter warned that the several hundred Irish shareholders concerned “should note that, as a practical matter, there can be no guarantee that – due to the timeframe imposed pursuant to the prospectus (and the timing of notification to the trustee) – there is sufficient time available to implement an exercise of rights in relation to some or all of the options”.

Shareholders were also required to ensure money for any rights purchased was lodged in Swiss francs at a branch of UBS bank in Zurich by the the 10am deadline last Monday.

It is unclear why the affairs of the Irish shareholders were managed through Link’s UK offices. Link, formerly known as Capita, has an office in Dublin.

In the event, many of the shareholders never even got the letter outlining their options until Tuesday, November 13th.

The new shares will start trading in Dublin and in Switzerland on Monday next, November 19th.

Link has said it will be writing again to the shareholders concerned to explain what happened.