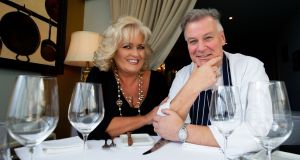 Derry and Sally Anne Clarke at their Baggot Street restaurant, L’Ecrivain. ‘We are lucky in the sense that we have a lot of space, we’re a big restaurant and we have big tables,’ he says. File photograph: Tom Honan

Michelin-starred Dublin city centre restaurant L’Ecrivain will now remain open until December 23rd rather than July, which had previously been slated as the date the popular eatery would shut its doors for good.

The restaurant, opened by Derry and Sallyanne Clarke in July 1989, has been closed for the past number of weeks in line with Government guidelines and, under the current road map, would remain shut for another eight weeks.

Derry and Sallyanne Clarke had planned to close the restaurant permanently in July as they move to a new venture in Dublin’s Temple Bar. But the Covid-19 pandemic has changed their plans, and the couple’s popular restaurant will now remain open until Christmas.

Mr Clarke told The Irish Times that a plan is being devised so that the restaurant can open on June 29th, under the Government’s programme for reopening the economy. Under the programme, restaurants will have to “comply with social distancing and strict cleaning protocols”.

“We are lucky in the sense that we have a lot of space, we’re a big restaurant and we have big tables,” Mr Clarke said. But, he added, if L’Ecrivain is not in a position to operate at capacity, it will be difficult to make money given the overheads involved in the restaurant business.

Mr Clarke previously told The Irish Times that the margin in his restaurant was in the region of 5 or 6 per cent net.

As to how much below capacity would be feasible, Mr Clarke said: “You wouldn’t be going below 80 per cent of revenue.”

The Clarkes’ decision to move on from their Baggot Street restaurant was due to the opening of another facility in Temple Bar. Mr Clarke noted that construction there has ceased, as a result of restrictions on building, and that that facility would not open on the same date as had been originally planned.

It had been intended that the business would open in September or October but that could run to as late as January now, he suggested.

For the foreseeable future, Mr Clarke envisages a number of measures that will need to be in place. “There are ways of doing it...I’m looking at getting partitions, masks, handwashing stations and someone on the loos all the time cleaning,” he said, adding that the place “will have to be cleaned down after we work each day”.

And while he believes “we’re going to have to lift the lockdown at some stage and go for it”, he said the upside of the shutdown is that he now has “a lovely painted house inside and outside and a garden manicured to the last”.