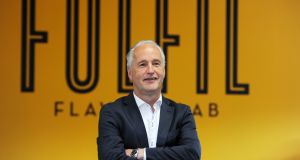 Fulfil Nutrition chief executive Brian O’Sullivan, who has announced that he will leave the company later this year. Photograph: Aidan Crawley

The move comes as a surprise, though both sides stressed that it was an amicable parting. Mr O’Sullivan, who joined Fulfil in 2017, initially as a consultant, will work out a six-month notice period to October.

In a statement, Fulfil said the chief executive was leaving “to explore new opportunities” after growing the business “successfully over the past number of years”.

Sources close to the business said there had been no disagreement or dispute between the chief executive and his board of directors. Staff, who have been briefed on Mr O’Sullivan’s departure, are said to be puzzled over its timing.

Mr O’Sullivan said the timing just seemed right, now that the company had put in place the structures to navigate Covid-19 disruption to the business.

The Cork businessman was the architect of Fulfil’s aggressive expansion plan that, in part, involved repositioning its protein-rich products for the general market rather that for a niche health and sports audience.

Mr O’Sullivan moved to Fulfil parent Bartoni after a 17-year career with Cadbury Ireland and, subsequently its new US parent, Mondelez. Prior to the Fulfil job, he had been based in Zurich in an international role for the confectionary giant.

In an interview with The Irish Times last year, he cited family reasons for the move home as the family had been split between Switzerland and Ireland.

Mr O’Sullivan’s departure comes as the company ramps up a joint venture with US chocolate giant Hershey which acquired a significant minority stake in the business last year.

That transaction, which Mr O’Sullivan oversaw, brought the fast-growing Irish business into a whole new league.

The move is seen as part of a strategy by America’s number one snacks and chocolate brand to expand its presence in a European market where it is currently poorly represented.

But it also opens the door to the prospect of an assault by the Irish company on the US market. To date, Fulfil has focused it ambitions on Europe, particularly the UK, but also the Benelux states, and even Australia.

The founders had previously worked for Mr Connolly’s Richmond Marketing and he had been an early investor in the group.

AIB bank came on board as part of that refinancing, taking a 25 per cent share of the business in a transaction that valued Fulfil at about €40 million. The Hershey investment was seen by industry sources as marking a significant step up in that valuation.

Fulfil reported revenue of over €25 million in 2018 and and industry sources had expected consumer sales of close to €100 million this year. That would make it the second largest confectionary brand in Ireland by sales behind Cadbury/Mondelez.

1 ‘Darth Vader’ masks developed in Ireland can help meat-plant workers
2 ‘Saudi Arabia is where the opportunities will happen in future’
3 Spare me the city-dweller’s longing for a rural idyll
4 Irish company insolvencies expected to spike near crisis level of 1,700 next year
5 Welltel acquires Intellicom in €5.5m deal
6 MSD buys Takeda biologics plant in Dunboyne
7 Over 200 Covid-related complaints lodged with financial ombudsman
8 Ten of the most mysterious aircraft disappearances
9 Vivendi's Messier falls foul of a formidable coalition
10 Consumer spending on the rise but people still staying close to home
Real news has value SUBSCRIBE