Kevin Toland to take up new role with Aryzta in September 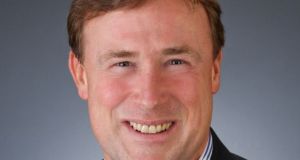 Incoming chief executive Kevin Toland: Aryzta seen its share price fall by as much as 30 per cent this year.

Swiss-Irish baked goods maker Aryzta said on Monday that incoming chief executive Kevin Toland will take up his position as chief executive of the group on September 12th.

Mr Toland was appointed to the role in May after the Cuisine de France producer saw its long-standing chief executive Owen Killian and two other top executives depart in March. There had been speculation that appointment might have been delayed until November if his current employer, airport operator DAA, didn’t agree to waive part of his six-month notice period.

The group also announced the appointment of Juergen B. Steinemann to its board as an independent non-executive director. Most recently, Mr Steninemann was chief executive of Barry Callebaut and he also held positions with Nutreco and Unilver.

Gary McGann, chairman of Aryzta said: “I am delighted to announce the appointment of Juergen as non-executive director. With his appointment we have further diversified and deepened the skills, background and experience of our board. Juergen has substantial experience in the food B2B sector and will provide valuable insight to the board.”