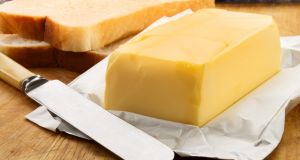 Renewed appetite for butter has been aided by shifting consumer views on health attributes. Photograph: iStock

Europeans are eating so much butter that the bloc’s stockpiles are nearly empty, adding to a rush of demand that has sent global prices skyrocketing.

The star of the US dairy market in recent years, butter costs have now soared to all-time highs in western Europe and Oceania.

The gains have been aided by shifting consumer views on its healthy attributes and a recent slowdown in the growth of global milk output. France’s Federation of Bakeries has called the price rise a “major crisis”.

The US department of agriculture (USDA) boosted its outlook for world consumption and downgraded production in a report this month. In the European Union, one measure of reserves fell to 1,369 tons as of the end of May, a 99 per cent plunge from the 92,548 tons held a year ago, the agency said.

Butter’s rapid price rise has been “the most notable” shift in international markets, and costs are unlikely to change soon, the USDA says.

“I don’t think we’re out of the woods with higher butter prices,” said Dave Kurzawski, a senior broker at INTL FCStone in Chicago.

“What we’ve known about butter for the past 50 years has kind of flipped on its head in the last 2½ or three.”

Global consumption is forecast to climb 3.1 per cent to a record 9.7 million tons this year, outstripping the 2.5 per cent rise in production, according to the USDA.

Consumers are increasingly turning away from vegetable-oil alternatives like margarine and now view butter as “safer”, the USDA said.

Spot prices for butterfat in western Europe have doubled in the past 12 months to a record $7,212.50 per ton, and costs in the region comprising Australia and the Pacific Islands are at an all-time high of $6,150, according to data going back to 2004. –