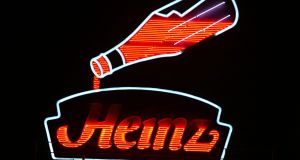 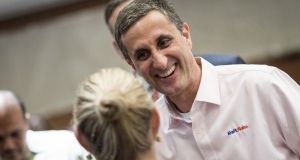 Bernard Hees said in the statement: “It has been an honour to serve as CEO of Kraft Heinz and to see it through its transformation over the past six years. I have confidence that Miguel and the team will take Kraft Heinz to new heights.”

Kraft Heinz’s chief executive is leaving the food company after a profit warning that shook the global consumer goods industry.

Bernardo Hees will be replaced at the start of July by Miguel Patricio, an executive at the brewer Anheuser-Busch InBev, backed by the founders of New York-based investment group 3G Capital, which controls Kraft Heinz.

Mr Patricio said on Monday that he was aware of the challenges ahead of him as shoppers shun in increasing numbers the packaged fare that has been the company’s mainstay for decades.

Yet the 52-year-old said he was confident he could revive the fortunes of the Chicago-based group, which makes Kraft processed cheese, Heinz tomato ketchup and HP Sauce. “There is nothing sweeter in life than a turnaround,” he said.

Mr Hees joins a growing list of top executives in the sector to depart in the face of rapidly changing consumer tastes. The chief executives of Unilever, PepsiCo and Colgate-Palmolive are among those to have left in the past few months.

However, the sudden decline in fortunes at Kraft Heinz, created in a 2015 mega-merger engineered by 3G and Warren Buffett’s Berkshire Hathaway, has been the industry’s biggest upset in recent years.

Kraft Heinz took a $15 billion (€13 billion) writedown in February to reflect a decline in the value of some of its biggest brands. The company also revealed it had received a subpoena from the US securities and exchange commission and cut its dividend by a third.

The ensuing share-price collapse prompted Mr Buffett, whose Berkshire Hathaway has a 27 per cent stake, to admit he had overpaid for Kraft’s merger with Heinz. Mr Buffett and 3G Capital bought Heinz in 2013 and merged it with Kraft two years later, valuing Kraft at $63 billion (€55.9 billion).

Mr Patricio said he wanted Kraft Heinz to anticipate new consumer trends rather than react to them and added that he was open to partnerships with other innovative consumer groups and even universities to help.

The incoming chief executive said he would also work on a new growth strategy – but that his focus would predominantly be on organic growth rather than dealmaking, which has long been a hallmark of 3G. That marks a shift in tone from Mr Hees, who signalled even after the profit warning that the company had an appetite for more acquisitions.

A native of Portugal, Mr Patricio’s priorities in the first two months include becoming familiar with the company’s workforces, its culture and the numbers behind the business. “Bernardo [Hees] concluded the first phase,” he said in an interview. “I bring to the table a new background.”

He has spent two decades at AB InBev, including as global chief marketing officer between 2012 and 2018. Most recently he worked closely with Carlos Brito, the drinks company’s chief executive, as chief special global projects officer.

“I can contribute in a different way . . . making the company more consumer-centric,” he said.

Mr Patricio, who lives in Connecticut, will relocate to Chicago to take up the position. Insiders said Kraft Heinz’s directors signed off on the appointment at a board meeting last week, having considered several other candidates.

They said Mr Hees’ departure was mutual and that the outgoing chief executive would work on other projects for 3G as a partner.

Mr Hees (49), is a long time 3G executive who oversaw the original Heinz purchase and subsequent merger. Alex Behring, the 3G executive who chairs Kraft Heinz, said in a statement: “We appreciate his contributions.”

Mr Hees said in the statement: “It has been an honour to serve as CEO of Kraft Heinz and to see it through its transformation over the past six years. I have confidence that Miguel and the team will take Kraft Heinz to new heights.”