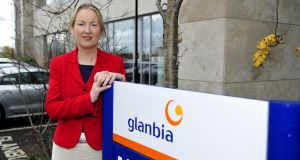 Irish food group Glanbia faces a number of large investors voting next week against its move to increase the salary of chief executive Siobhan Talbot by 22 per cent and make it easier for top managers to receive bonus stock awards.

Glass Lewis and Institutional Shareholder Services (ISS), the two most influential advisers to major international investors on corporate governance issues, have advised clients invested in Glanbia to reject its remuneration report at its annual general meeting (agm) next week.

Glanbia, however, is not bound by the outcome of the vote. Glass Lewis said it had “severe reservations” about the Kilkenny-based group granting Ms Talbot a 22 per cent rise in her basic salary to €1.05 million this year, and her finance director Mark Garvey enjoying an almost 15 per cent increase to €581,000.

Glanbia said in its annual report that the increases are on foot of it benchmarking the executives remuneration against Irish, UK and US equivalents as they signed new three-year contracts.

Glass Lewis also said that it “firmly question[s] the rationale” behind Glanbia’s lowering of performance targets attached to its long-term incentive plan.

The company would only need to achieve a 9 per cent return on capital employed for executives for share awards to kick in under this element of its long-term incentive plan, compared to 10 per cent previously. The threshold for maximum awards under this part of the plan has been lowered to 12 per cent from 13 per cent.

A spokeswoman for Glanbia said that the remuneration report was consistent with a broader pay policy for 2018 to 2020 that was backed by investors at last year’s agm.

“Glanbia is satisfied that the salary adjustments made are reasonable and align with the median of the target benchmarks set out in the remuneration policy,” she said.

ISS also recommended that shareholders vote against the remuneration report, partly on the basis of the “significant” pay increases for the two top managers.

In addition, the proxy advisory firm has come out against the fact that the executives’ new contracts include 12 months’ pay in lieu of notice should their employment be terminated, in addition to 12 months’ salary as long as they don’t enter into competition with Glanbia for that period after leaving.

“A key consideration during 2018 was the need to retain Glanbia’s executive team at a time of significant planned transition for the board in the coming years,” Glanbia’s spokeswoman said.

Ms Talbot, Glanbia’s chief executive for almost five and a half years, saw her total compensation rise by 20 per cent to €2.34 million in 2018 as the group’s adjusted earnings per share rose by 9 per cent last year to 91.1c, excluding the impact of currency fluctuations, to beat the upper end of its own guidance of 5 to 8 per cent growth.

Glanbia also unveiled a deal in February to buy a non-ingredient solutions business, called Watson, which is based in Connecticut, for $89 million. It will be integrated into its Glanbia Nutritionals division.