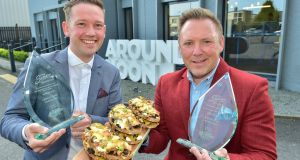 The Newry-headquartered company, which manufactures an average of 24 million products per year from sandwiches to wraps, salads and bakery items, grew its pre-tax profits to nearly £680,000 in the 12 months to December.

Around Noon was set up by husband-and-wife team Francis and Sheila Chambers in their family kitchen in 1989.

It initially made sandwiches for local businesses around Newry but today supplies more than 200 “hand-held food-on-the-move” products to a range of businesses including retailers and coffee chains across the UK and Ireland.

It currently employs 234 people. In addition to its Newry headquarters, it has also acquired a London manufacturing base and a bakery operation in Dublin.

In its latest set of accounts Around Noon states that it “plans to continue its present activities and current trading levels”.

But the company also warns that one of the key risks it faces is exposure to currency variances, given “a significant proportion of the company’s main activities” are conducted in the Republic.

“The company’s activities in Europe are conducted primarily in euro,” it highlights.