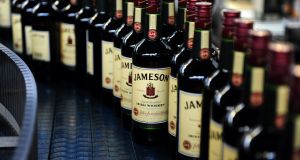 Ireland’s best selling whiskey, Jameson, saw sales fell for the first time in many years despite solid growth in some of its key markets.

The company, which makes Jameson Whiskey, said the Covid-19 pandemic had an impact on figures in the latter half of the financial year, leading to a 1 per cent dip in revenue for the 12 months to end-June.

“We had a very strong start to the financial year, with sales of Jameson Irish whiskey growing by 9 per cent in the first half of the year,” said Conor McQuaid, chairman and chief executive of Irish Distillers. “The brand had its busiest December ever, selling 940,000 cases globally. But like many others around the world, the Covid-19 pandemic has impacted our business.

“We saw growth slow in some markets and, in cases like global travel retail, come to a relative halt in the second half of the year.

However, he said, Jameson achieved growth in over 50 markets, including key markets like South Africa, Russia, Britain and Ireland, and experienced solid growth in emerging markets including Nigeria and China. ”

The company said nothing about the United States which has been considered a key market for the brand.

Growth in Ireland was 2 per cent, with 9 per cent in the UK, 17 per cent in Australia and 30 per cent in Germany. South Africa and Russia saw sales increase by 1 per cent. while newer markets such as Nigeria and China saw growth of 163 per cent and 48 per cent respectively, with India up 25 per cent and Japan rising by 16 per cent.

Irish Distillers also saw growth across its super premium whiskeys, led by Redbreast with 14 per cent and Midleton, which grew 15 per cent. February saw the launch of the company’s Midleton Very Rare Silent Distillery Collection, which included a 45-year-old Irish single malt. The distillery will have one release annually until 2025.

Growth in the ready-to-drink (RTD) sector continued in 2019/20, with Jameson RTD growing 31 per cent year on year , driven by strong growth in Australia and Canada.

“The growth in the RTD category shows the direction of consumer trends – the desire for innovation and convenience,” Mr McQuaid said.

Jameson Cold Brew, a combination of Jameson Irish whiskey and cold brew coffee, which was piloted in Ireland initially was officially launched in the US in January, he said. Despite the impact of Covid-19, Mr McQuaid said it had “gotten off to a fast start with a fantastic consumer reaction”.

“There is no doubt that this is a challenging business environment. However, we know from history that the Irish whiskey industry has proven itself to be very resilient.

“Having experienced a remarkable decade of export-led growth, we remain confident in Jameson’s ability to bounce back and continue its growth trajectory,” he said.