Aryzta pushes ahead with chairman nomination 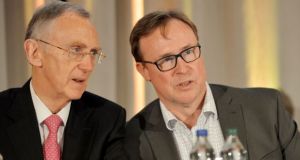 Swiss-Irish food group Aryzta is to press ahead with its nomination for chairman Gary McGann’s replacement, despite opposition from activist investors.

The group said it had failed to reach agreement with the shareholder group led by Veraison and Aryzta’s largest investor Cobas, on proposed nominations to the board and rejected the group’s proposal to remove chief executive Kevin Toland from his role on the board.

“Any diminution of his leadership, role or authority, increases business risk, and is not considered to be in the best interests of Aryzta,” the company said in a statement. “His leadership is integral to the business as it continues to manage through the Covid-19 crisis and provides effective executive representation at board level.”

The dissident shareholder group is seeking changes to the company’s board in a bid to reverse the decline in shareholder value, which is down more than 80 per cent since late 2018.

Aryzta’s attempt to get Andreas Schmid elected at next month’s EGM faces opposition from activist shareholders, who described his nomination as not in the best interest of the bakery group.

But Aryzta said it would push ahead with its plans, describing Mr Schmid as “one of Switzerland’s most distinguished business leaders”.

“Current circumstances necessitate a proven business leader with extensive expertise of board leadership, within complex, multinational, publicly-listed companies of scale,” Aryzta said. “ The board believes Andreas G Schmid’s highly effective board leadership is in the best interests of Aryzta and all its stakeholders.”

The group is also proposing the election of Jim Leighton, Tim Lodge and Mr Schmid as members of the remuneration committee following the resignations of Gary McGann, Dan Flinter and Rolf Watter from the board of directors and the committee.

Aryzta said the board would support two of the shareholder group’s candidates provided they have suitable qualifications and experience, and observe a nominations process.

The board is also opposing the proposal to remove Annette Flynn, current chair of the remuneration committee as a member of the board.