Porterhouse recovery hampered by lack of tourists and workers 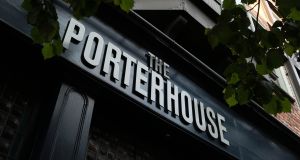 The Porterhouse, Temple Bar: “We had been trading well in 2018, 2019 and up until the start of the pandemic this year.” Photograph: Nick Bradshaw

The Porterhouse Group has recorded “a very minimal recovery” in its two Dublin city centre bar-restaurants, where a lack of tourists and office workers has had a massive impact on turnover.

That is according to the group’s business development director Elliot Hughes, who said the business “has been very negatively impacted, like all in the sector, by Covid-19”.

Mr Hughes said minimal recovery has taken place at the Porterhouse sites at Nassau Street and Temple Bar in Dublin, while the group’s London Porterhouse venue had also been hit by low numbers of tourists and office workers impacting on revenues there.

“Our restaurants are now performing well, but still struggling by virtue of being closed for three months,” he said.

The group’s late-night venue, Lost Lane off Grafton Street, remains closed. “We are still optimistic about opening this, but the current regulations make this incredibly challenging.”

The Porterhouse Group spent €800,000 on the former Lillie’s Bordello venue to transform it into Lost Lane. It was only open 11 months before the Covid-enforced closure in March.

Prior to closure, Lost Lane “was performing well”, Mr Hughes said. It is the only Porterhouse Group site yet to reopen.

New accounts for the Porterhouse Group show operating profits decreased by 51 per cent to €1.36 million in the 12 months to the end of February 2018.

Revenues for holding company A Pint of Plain Ltd increased by 7 per cent from €32.75 million to €35.16 million during the period.

“We had been trading well in 2018, 2019 and up until the start of the pandemic this year. Prior to that we had hoped to see increased profit year on year versus 2019,” Mr Hughes said.

The group’s Dingle Distillery had been reliant on the group’s bar and has needed to diversify from the impact of Covid-19, he added.

“We are delighted with the progress we have made with our new range of cans as well as our continued success with the bottle range.”

On the continuing closure of the country’s “wet” pubs due to Covid-19, Mr Hughes said there seemed to be “no thought put into working out how pubs can operate in a safe manner” by the Government.

“There needs to be a more nuanced approach taken, centred around smaller groups, seated at tables with social distancing and cleaning throughout the premises as well as staff wearing protective face coverings. This combined with strong enforcement powers to shut non-compliant bars down would work.

“I would be the first to call for non-compliant bars to shut to ensure those that are following the rules are allowed to trade.”

Mr Hughes said the group had been unable to keep its Subway premises on Nassau Street operating as a result of Covid-19.

The group today employs 250 people. “There have been a number of other job losses across the group which have been unfortunately unavoidable,” Mr Hughes said. “However, we have by and large been able to keep the majority of our staff on, albeit with reduced hours.”

1 Fair deal? Family at odds with hospital and each other not so sure
2 Aldi to impose limits as Christmas toys go on sale
3 Ireland ‘needlessly importing timber’, as industry blames Government
4 Monsoon landlords win challenge over creditors arrangement that cut rents
5 Irish elearning company LearnUpon closes €47.4 million investment
6 EU farming subsidies deal criticised as insufficiently green
7 Covid-19 has shown that much of ‘normal’ life should have been binned years ago
8 First look: Is the iPhone 12 Pro the best smartphone out there?
9 Cabinet to agree on implementing EU travel plan
10 ‘I hate haggling because I hate when people do it to me’
Real news has value SUBSCRIBE