The Irish Times Business Person of the month: Donal Murphy 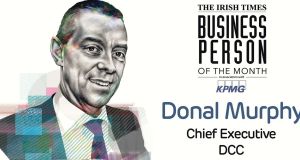 Donal Murphy, chief executive of the diversified energy and services group DCC, has been named the May winner of The Irish Times Business Person of the Month award for May, which is run in association with KPMG.

In May, DCC, one of just a handful of Irish companies ever to have made it onto the blue-chip FTSE 100 index, reported yet another set of solid financial results and announced its 25th year of dividend growth since its stock market listing in 1994.

Its operating profits rose by 20 per cent to £460 million, and Murphy also outlined its ambitions to expand in the LPG (liquid petroleum gas) fuel markets in the US. DCC is an acquisitive Irish company and has the capacity to spend up to €1 billion on buyouts.

Murphy has been with DCC for 21 years and previously ran its technology and energy divisions, before taking over the chief executive’s role from Tommy Breen in July 2017. Since then, the company has maintained its upward trajectory and buttressed its status as an ambitious Irish company that has made a real impact abroad.